Three out of four ad executives believe it is inappropriate for Donald Trump to make statements pro or con about consumer brands that support his administration or his family’s businesses, according to a survey of advertiser and agency executives conducted last month following a series of high-profile endorsements by the President.

The finding comes days after NBC News released the results of a survey of American consumers, which revealed that the majority would either be “less likely to use” or would actively boycott brands endorsed by President Trump.

That study, conducted by Simmons Research, found that only 18% of respondents were more likely to use brands endorsed by Trump, while 49% said they were less likely and 29% would boycott the brand.

“So right now, that says a presidential endorsement of a good or service is more likely to cause a boycott or slump for that product than a bump,” NBC News’ Chuck Todd said while unveiling the findings Sunday morning on “Meet The Press.”

Noting that the findings skewed more favorably among Republican than Democratic or Independent respondents, Todd said:

“While President Trump's hotels and golf clubs are flourishing for the folks in line at the cash register, Trump's brand may be taking a hit, as Americans show their willingness to view consumer choices as political decisions. In fact, don't be surprised to see more and more brands simply run away from politics altogether -- forget pro or con on Trump. They may not want to touch any of it.”

On the flip side, respondents are more mixed on whether it is appropriate for consumer brands to endorse the Trump Administration and its policies, according to the Advertiser Perceptions survey of industry executives. While 35% said it is appropriate, 47% said it’s not. Marketers were more split (41% responding yes, 46% no) versus agency executives (31% yes, 47% no).

Asked whether their agencies were proactively advising them about consumer sentiment surrounding Trump and his actions, only 21% of marketers said yes, while 70% said no.

Asked what the motivation was for brands that lean into political endorsements, only 29% said it was to influence public policy, while 71% said it was to improve their image with their target consumers. 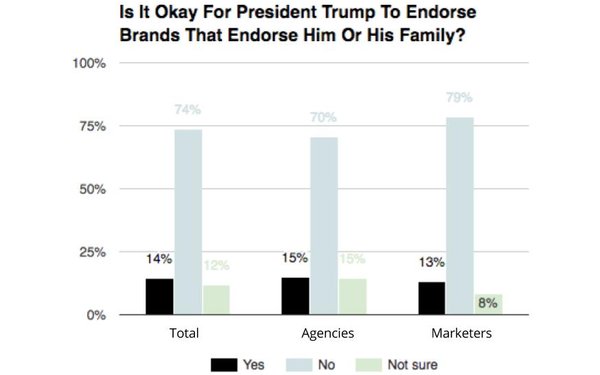 Source: Advertiser Perceptions Inc. survey of advertiser and agency executives conducted online during first two weeks of March.
Base = 308 respondents; 185 agency, 123 marketer.
Question asked: Is it appropriate for President Trump to make statements pro or con about consumer brands that support his administration or his family businesses?