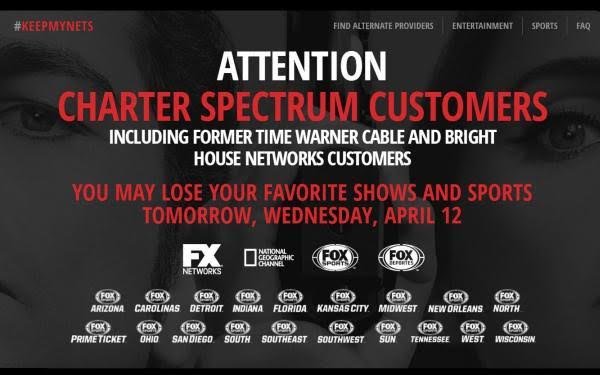 Fox wants your help in its fight against Spectrum. Should you give it to them? Answer: No.

You are under no obligation to participate in this battle, despite Fox’s entreaties that began running a few days ago during shows on its various networks.

Around here, we first saw the messages while watching a show on FX Sunday night. Suddenly, at the outset of a show which we had looked forward to watching, a “crawl” appeared at the bottom of our screens.

It warned us that we will soon be prevented from watching FX shows such as “The Americans,” “Fargo” (the third season premieres later this month) and “FEUD: Bette and Joan” because Spectrum, our cable company, was threatening to cut off our access to FX and other Fox-owned networks such as Fox TV (Ch. 5 here in New York), Fox News Channel and National Geographic.

Spectrum is the new cable company that was formed from the merger of three cable carriers last year – Charter, Time Warner and Bright House Networks. Spectrum is reportedly embroiled in a contract dispute with the various Fox networks over terms of a new carriage agreement.

These things almost always come down to dollars and cents – what the cable carriers demand in fees from the program providers for the privilege of allowing the networks to have access to your home and family.

Part of the “negotiation” process in these situations is to refuse the other side’s terms right up until a deadline for the big shut-off – at which point the deadline is usually, but not always, pushed forward a few days. This particular go-round has already passed several deadlines.

Another part of the process is this public posturing undertaken usually by the supposedly aggrieved TV networks.

In addition to the crawls running on various Fox networks and shows – and causing a distraction during the very shows the crawls insist are under threat – Fox has established a Web site called KeepMyNets.com. The image, above, is the home page of KeepMyNets, which blares the same warnings and alarms.

So if you love “Fargo” and “The Americans,” various sports such as NASCAR, “The Simpsons” and “Hannity,” should you be alarmed at the prospect of losing them? Well, maybe. From time to time, these shut-offs actually occur.

But none of them last. Eventually, the content providers always pony up. Otherwise, they would have no audience. Or at the very least, their only audience would be on all the other platforms everyone always talks about today – digital, streaming, whatever.

At present, the biggest audiences are still found on regular, “linear” TV, even if some of that viewing is delayed a few days via other means such as DVRs.

But what does any of this have to do with you? Actually nothing. These on-screen pleas for your help in one giant company’s negotiations with another one are unseemly.

Among other things wrong with them, this Fox plea, for example, makes it seem as if Fox has no role to play whatsoever in this egregious persecution at the hands of Spectrum.

Fox’s campaign to get you to help it in its cause would have you believe that Fox was just sitting there innocently providing you with the greatest TV shows on earth when all of a sudden, the big bad wolf of Spectrum appeared outside and was threatening to blow Fox’s house down.

It should go without saying, but losing the Fox networks should alarm no one but Fox, especially since they will only go missing for a matter of days (if they go missing at all).

These pleas to involve you, the end user, in these corporate goings-on is like giving you a glimpse of the proverbial sausage factory.

As cable subscribers and Fox viewers, we who are on the receiving end of these rallying cries to get involved in a high-stakes corporate spat are in no way obligated to do so. Our only obligation is to ourselves – to pay for cable every month and either watch it or not.

And we certainly don’t need to know how the sausage is made.