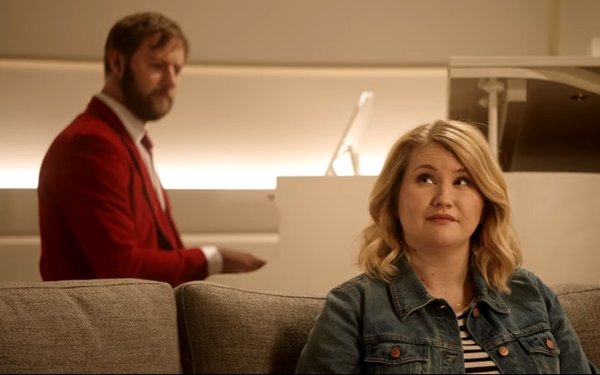 Chipotle tested TV in a few markets last year, but this is the first time it’s using national broadcast television as a major campaign component, according to communications director Chris Arnold. The spot will also air on national cable networks.
Called “As Real As It Gets,” the campaign is from Venables Bell & Partners, which was named Chipotle’s lead creative agency in January.

The somewhat surreal TV/video creative (below) aims to build awareness of Chipotle’s claim that it’s now the only national chain to use “no added colors, flavors or preservatives, artificial or natural” in its ingredients. (Chipotle and rival Panera Bread are in something of a war of words over clean ingredients claims.)

In the 30-second spot, comedian/actress Jillian Bell, seated in a piano lounge located inside a giant Chipotle burrito, responds to questions from an unseen interviewer — voiced by actor Jeffrey Tambor. He encourages Bell to relax and “get real,” but getting truthful answers from her proves difficult, at best.

The spot will air through mid-summer.

The creative also includes three 60-second videos employing the same core concept: a longer version of the interview with Bell, and interviews with comedians/actors Sam Richardson and John Mulaney.

Richardson has no problem revealing his quirks (his socks get tight when he’s nervous), while Mulaney finds it impossible to stop using jokes to avoid sharing personal information or emotions.

For this “next chapter” of the brand, Venables

Bell & Partners “set out to avoid all of the conventions of fast food advertising,” and use humor to “cut through the clutter of confusing claims, limited-time offers and farmers holding produce,” to create a campaign that’s “very true” to the brand, said Will McGinness, partner and executive creative director for the agency.

The video creative is being featured on Chipotle’s site and used in digital advertising and social media. The campaign also includes “get real” radio and out-of-home creative.
Media planning and buying for the campaign was done by MullenLowe MediaHub.

Chipotle — which has of late shown some signs of starting to recover from the sales and brand damage resulting from its series of food-borne illness crises in 2015 — also recently launched a science fiction-formatted content marketing video series for kids and parents that’s focused on the benefits of unprocessed foods. The brand has partnered with Discovery Education to distribute the series and related materials in schools.