A Couple Of Notes About O'Reilly As The End Nears 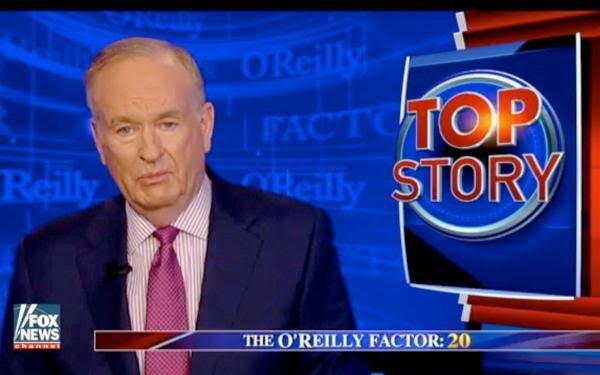 Indications are stronger than ever today that Bill O’Reilly’s days at Fox News Channel are numbered, if not over.

He went on a vacation last week with the intention of returning to the host’s chair on “The O’Reilly Factor” next Monday, April 24.

As expected, in his absence from the air this week, the news media has been full of stories about efforts on the part of various actors to prevent his return from happening.

For example, there was an apparent march, principally by women, on Fox News headquarters on Sixth Avenue on Tuesday.

In conjunction with this protest, in which participants held signs demanding that O’Reilly be fired, someone actually went to the expense of hiring a small plane to fly over Manhattan trailing an O'Reilly protest banner.

Also on Tuesday, a story circulated that another sex-harassment accuser had emerged -- an African-American woman who once held a clerical job somewhere in the vicinity of O’Reilly's office at Fox News. According to reports, the woman said O'Reilly “leered” at her and referred to her as “hot chocolate.”

Are you picturing this scene now? Bill O'Reilly, the Fox News guy, is supposed to have said something to this woman on the order of, “Hey, what's cookin’, hot chocolate?” -- like he's Huggy Bear in “Starsky and Hutch.” Then he supposedly leered. Or maybe he leered before, or even during, this “hot chocolate” come-on.

Well, maybe he did these things, or maybe he didn't. The incident making headlines this week allegedly happened in 2008. In publicizing this accusation, lawyer Lisa Bloom (representing this woman who has not been named) was quoted in a Hollywood Reporter story as saying: “[O’Reilly] would never talk to her, not even hello, except to grunt at her like a wild boar.”

“Like a wild boar.” If this were a courtroom, opposing counsel would be within his or her rights to object to this “wild boar” characterization, right? Perry Mason would.

By Wednesday, the O'Reilly coverage had moved to The Wall Street Journal, where a headline reported that Fox News was “preparing” to “cut ties with O’Reilly.” This story was an aggregation of other stories from the WSJ and elsewhere that had popped up recently reporting that Fox News execs were busily discussing their O’Reilly exit strategy.

The catalyst for all this has mainly been the New York Times story published on April 1 that reported that Fox News and/or O'Reilly himself have paid up to $13 million in settlement money to various women who have accused him of sexual harassment at FNC.

Some of the stories on this situation indicate that O'Reilly and Fox News have responded to the various accusations, and the widespread coverage of them, by describing them as part of a conspiracy on the part of left-leaning groups and media organizations who have long sought an opportunity to put a dent in Fox News Channel's dominance of the news ratings on cable TV.

Personally, I have seen no statements or quotes to this affect stemming from Fox News or attributed to Fox News. In these stories, this “response” is vaguely summarized in a paragraph or a single sentence.

Certainly, toppling Bill O'Reilly would represent a huge benefit to all media that see him and Fox News Channel as a competitor. In that respect, you can hardly blame rivals such as CNN and MSNBC for piling on. They are overdoing it, of course, but their audiences are probably lapping it up.

However, unless actual proof can be found that O'Reilly engaged in egregious, inappropriate sexual harassment behavior in violation of 21st Century Fox corporate guidelines for employees, and aspects of his contract, then the only reason to jettison him is because he has already been tried and convicted in the court of public opinion, whether he is guilty or not.

On Wednesday morning, an opinion poll materialized that said 46% of those surveyed for this poll (conducted by an outfit called Morning Consult) felt “The O'Reilly Factor” should be cancelled. A story about the poll on Politico said this result represented an 11% increase from a similar poll taken just last week.

Like him or not, I always said O'Reilly was a great broadcaster -- entertaining, flamboyant, over the top. It is a shame he has to go out this way.

news, tv
5 comments about "A Couple Of Notes About O'Reilly As The End Nears ".
Check to receive email when comments are posted.
Read more comments >
Next story loading