The more digital our social lives have become, the more many of us seem to crave the tangible, the experiential, the takeaway that doesn’t vanish with the swipe of a finger or the beep of barcode scanner.

My brother, for instance, keeps a drawer full of crinkly ticket stubs from long-ago baseball games, rock concerts and the soon-to-be-defunct circus. If he were a Philadelphia Eagles fan (which he quite decidedly isn’t; go, Giants!), I’m sure he’d be among those fans who were bitterly disappointed when that team discontinued its use of paper tickets.

However, the Eagles had a remedy for the 2016 season that seamlessly combined the digital and physical realms. New York City-based experiential martech company M-ND Media created an activation that allowed its fans to generate their own commemorative “tickets” by uploading game-day Instagram posts to its displays at Lincoln Financial Field and printing out personalized keepsakes.

M-ND says it processed 14,634 photos for the Eagles last year that generated 326,507 likes on social media and reached nearly 57 million users. In return, the Eagles received owned data about fans’ social media interactions that they could use in ongoing loyalty, engagement and sales initiatives.

“We’re not a photo booth company,” emphasizes company CEO Jim Hopper, who co-founded the company as FOTOfwd with Peter Wells in 2014. “We are a media advertising platform” that agencies bring to their pitches. “Everything from the first activation until now has been at the client’s request.”

That first-ever activation, The Daisy Marc Jacobs Tweet Shop, was a pop-up shop where anyone who posted on Twitter or Instagram with #MJDAISYCHAIN was rewarded with items from the Daisy (a fragrance by designer Jacobs) store. It won the Clio Image Award for Experiential Engagement for parent company Coty in 2014. 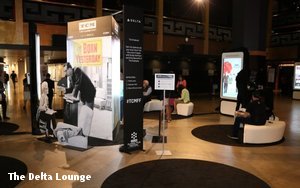 Rather than require users to download yet another app, M-ND’s activations use the social media platforms that are already on a person’s devices, whether it’s Facebook in the U.S. or WeChat in China.

An activation earlier this month in the Delta Air Lines lounge at the TCM Classic Film Festival in Hollywood allowed attendees to take photos in front of the backdrops of such as classics as "Born Yesterday,"  upload their photos to Instagram using M-ND displays, and print co-branded (TCM & Delta) commemorative photos with the hashtag #TCMFF, for example.

Besides the engagement analytics, TCM got the kind of owned data (social media handles, emails, etc.) that Facebook, Instagram, Twitter and Snapchat don’t share with marketers. And TCM is now offering the M-ND Matter Displays as part of its sponsorship packages.

Melissa Shoes, meanwhile, just started to install permanent displays in its Miami and Orlando locations. Customers can explore the retailer’s digital lookbooks and send their favorite styles to their friends.

While trying on the shoes at the store, customers will also be encouraged to post photos to their own social media accounts using a geotag or the hashtag #melissashoesusa, and to print their photos using the M-ND Matter displays. There are incentives such as discount codes for posting, a weekly photo contest and free membership in the Melissa Shoe's Plus Club Card program for earning the most likes and comments.

“We’ve pretty much done an activation on every continent,” Hopper says. “Which is pretty cool. My partner Pete and I never thought we’d be going from Hong Kong or Tokyo, to being on the Nile River with Canon, to London with the travel and tourism board. When you start a company, you kind of picture the U.S. but it has literally taken us around the world.”

Some of you might think, as Steve Ballmer evidently does, that generating any paper at all is a remnant of the past. But the footer on the contact page on M-ND’s Web site might be read as an indication that pulp and bytes can fruitfully co-exist, at least a few years into the future down on Crosby St.: “© 2020 M-ND, All Rights Reserved.”