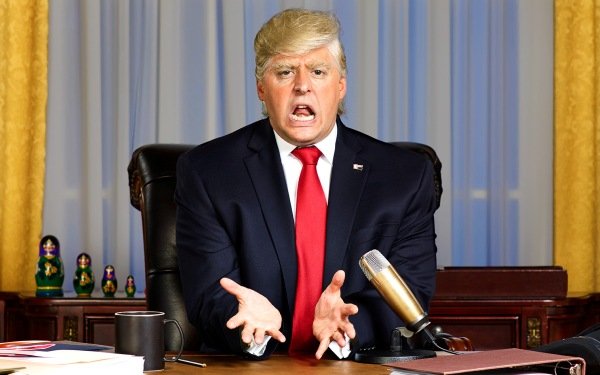 Let the record show that Anthony Atamanuik does a pretty entertaining impersonation of Donald Trump.

But watching him do it for a half-hour (actually 22 minutes or thereabouts) in “The President Show” on Comedy Central might not be everyone’s idea of a good time.

Comedy Central premiered this new show last night following “The Daily Show with Trevor Noah.” The network intends to air “The President Show” every Thursday night at that time.

Doing an entire weekly half-hour show whose sole purpose is to lampoon Trump probably made a certain amount of sense on paper.

In the Comedy Central realm, if such a show can attract a million viewers (or maybe even less), then it would be counted as a success.

Based on the available evidence (such as all the public displays of dismay over Trump's election, particularly among the young people whose attention Comedy Central craves), the network must have felt that there are enough people out there who hate Trump in sufficient numbers to deliver an audience to this weekly exercise in presidential impersonation.

However, there are several problems with this way of thinking. For one thing, “The President Show” Thursday night played like an over-long “Saturday Night Live” sketch. And as any long-time “SNL” watcher knows, “SNL” sketches that beat their one joke to death and stick around too long are among the worst features of that show.

Mentioning “SNL” in this context provides a segue to the next point about “The President Show,” which is that we don't necessarily need yet another Donald Trump impression on TV.

Not only has Alec Baldwin made a name for himself doing his own impression this season on “SNL,” but Trump is constantly parodied all over the place all the time. Jimmy Fallon is also among those who are seen on TV more or less frequently in a Trump wig.

Perhaps the presence of all of these other impersonators emboldened Comedy Central to say yes rather than no to mounting their own interpretation. And they certainly found a talented guy to do it for them.

In addition, now that the Trump administration is here to stay, it’s possible that the public’s appetite for media that complains about him constantly might be seen to wane in the coming months. “The President Show” might actually be late to this party.

In the premiere episode, “The President Show” was styled like a late-night talk show that originates from the Oval Office. The fake Trump plays the “host” from behind his presidential desk.

He opened the show with some introductory remarks in which he made various mistakes when referring to past presidents. “Franklin Eleanor Roosevelt,” said fake Trump, in describing FDR, “who was brutally attacked by the Italian anarchist, Marco Polio!”

There's a guest couch next to the desk, but on this premiere episode, there was no guest. There was a sidekick, however -- a fake Mike Pence, played by Peter Grosz in a white Pence wig.

Other segments included one in which the fake Trump took a camera crew on a tour of the Manhattan neighborhood west of Trump Tower (not far from a Comedy Central studio facility). As Trump himself might describe this bit: Not funny, not funny at all.

Later in the show, there was a guest -- the real Keith Olbermann, of all people. But this guest segment, in which host Trump “interviewed” Olbermann, did not take place on the Oval Office set of this fake late-night show that we had been shown previously.

A question that often arises for me at points such as this, when I'm writing these critiques, is this: Why am I always the one who has to suggest these things? I don't even work in the television business. Why can’t the people who make these shows ever think of these things themselves? They’re the ones who are supposed to know these things. Alas.

In the spirit of generosity and optimism that is the hallmark of the TV Blog, I wish to emphasize that I wish Anthony Atamanuik -- whose name I fear I will never be able to spell without looking it up -- all good fortune with this show and his very fine Donald Trump impersonation.