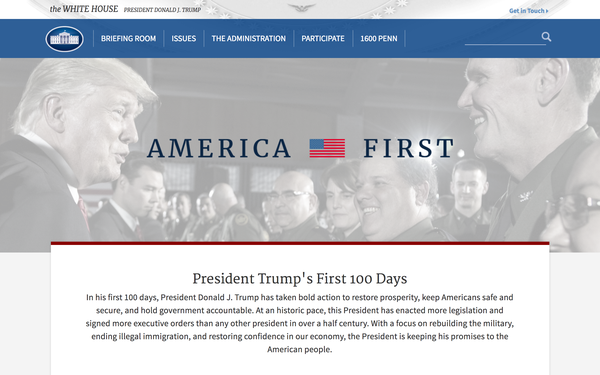 The Trump administration has launched a new page on WhiteHouse.gov, touting the successes of President Trump’s first 100 days. The page title is “America First,” a Trump campaign slogan, and one with a dark and troubling isolationist and anti-Semitic history.

Promoting an unsubstantiated view of a mediocre first 100 days, the White house writes:

“In his first 100 days, President Donald J. Trump has taken bold action to restore prosperity, keep Americans safe and secure, and hold government accountable. At an historic pace, this President has enacted more legislation and signed more executive orders than any other president in over a half century.

"With a focus on rebuilding the military, ending illegal immigration, and restoring confidence in our economy, the President is keeping his promises to the American people.”

There are numerous problems and questions with these statements. They offer an example of what has been dubbed “fake news.” The White House is using taxpayer money to tout a largely unsuccessful presidency. (The fallout puts two myths to rest: First, that businessmen are adept at running government. Second, that government should be run as a business.)

One of the major promises of the Trump campaign — installing a travel ban on a number of Mideast countries (Trump called it a ban on Muslims during the campaign) — has been halted, twice, in the courts for violating the equal protections clause of the Constitution, in addition to other fatal flaws.

Earlier in January 2016: “We have a president that can't get anything done, so he just keeps signing executive orders all over the place.”

But now, using the very platform he pilloried, Trump paints executive orders as a success.

Likewise with legislation, the major promises of the campaign are not being kept. The repeal and replacement of the Affordable Care Act failed to get to a vote in the U.S. House of Representatives, while funding for his Mexican border wall is stalled, at best.

The most striking attempt at creating a fake news, or post-truth discourse on the site comes as the administration links to a Wall Street Journal editorial. Without noting the source is an opinion piece on the 100 days page, though it is present in the actual document, a quote is pulled out and used as the image-link:

“The Trump order [on eliminating regulations on coal] is a promise in the bank for the voters who elected the President because he promised to focus on jobs and revving up the economy.”

Is it? By all economic forecasts, coal jobs are not coming back. As CNN and Forbes pointed out this month, natural gas is cheaper, cleaner and there is loads of it in the U.S.

Such "promises" underscore why responsible journalism and policies matter. Politicians, journalists and commentators must be clear about their intentions and sources when making statements that reach a wide audience. What we see on WhiteHouse.gov’s 100 days page is a concerted attempt to twist reality into any shape desired by the administration.

Blurring the lines between fact-based journalism and pure commentary has fostered a climate of fake news — and in this instance, at the taxpayer's expense.

If the White House continues to decry mainstream outlets as fake news, it must make an effort to avoid creating its own alternative reality.