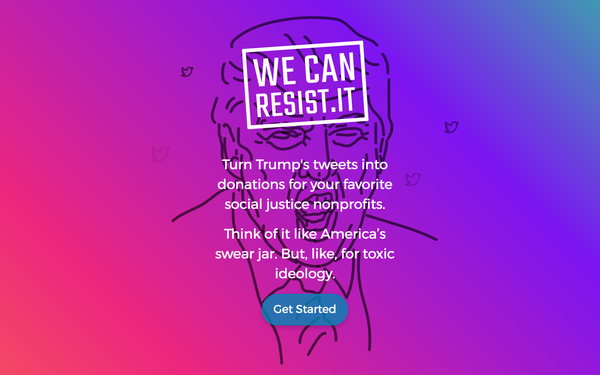 President Trump’s Twitter activity played an outsized role in the news cycle during the 2016 campaign. While his erratic use of the social-media platform as a candidate appealed to supporters, the same activity is now being harnessed to fund raise — in opposition to his administration.

A new app —  WeCanResist.it — gives users the ability to turn President Trump’s tweets into donations to nonprofits fighting on the front lines of policy battles plaguing the Trump administration.

"We're using Twitter, the very medium that Trump loves best — and that he says was key in helping him win the election," stated app cofounder Allyson Kapin. "Trump has used Twitter to launch attacks on Muslims, reproductive healthcare, immigrants, the LGBTQ community and environmental policies."

Users select nonprofits they wish to support when they sign up for the app, set a donation amount per tweet and a monthly maximum. At the end of each month, users get an overview of how many times Trump tweeted, and how much they donated in response.

A full 100% of donations through the app go to the specified nonprofits.

"Think of WeCanResist.It like America's swear jar. Every time Trump goes on a Twitter rampage or tweets something dangerous or hateful, our app lets you automatically donate to a nonprofit that is fighting to protect democracy, human rights, or the environment," Kapin stated.

She added that while high-profile nonprofits have raised millions since Trump's election, other organizations "doing equally important work who desperately need funding to sustain their efforts to fight Trump's anti-democratic agenda.”

WeCanResist.it may help redeem Twitter in the eyes of many progressives who thought the platform did not do enough to counter hate-inspired tweets from the Right during the campaign.

Cofounder Evan Williams weighed in recently on Twitter’s role in the 2016 election when speaking with The New York Times: "If it's true that he wouldn't be president if it weren't for Twitter, then yeah, I'm sorry."