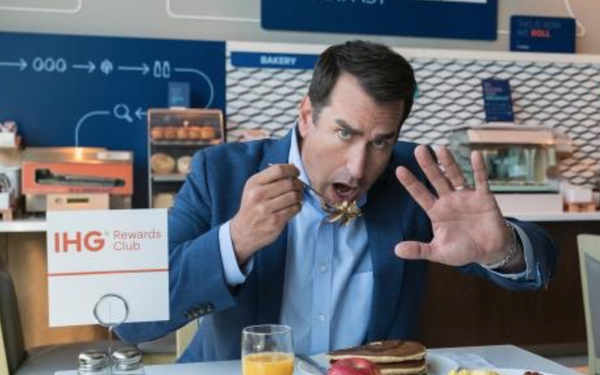 With the theme “Be The Readiest,” the brand enlisted Jukin Media, a digital entertainment company that specializes in user-generated videos.

A series of creative vignettes produced by creative agency of record Ogilvy and Mather include crowdsourced videos demonstrating how people are on the top of their game when they are the “readiest.”

With over 60 million fans across its social channels, Jukin Media curates and produces video for social platforms. Jukin mined its video library and combed the broader social Web to find videos that demonstrate why being ready just doesn’t come close to being the readiest.

“This is a content-led strategy, and the content in this campaign reflects the spirit of our guests,” said Jennifer Gribble, vice president, Holiday Inn Express, Staybridge Suites and Candlewood Suites Brands, Americas, IHG, in a release.

Riggle’s role expands to “champion of the readiest,” Gribble says. He will introduce the brand’s new egg white omelet and "better than ever" pancake flavor and will tease more breakfast innovation to come.

“Over the past two years, Rob has played an integral role in elevating the Holiday Inn Express guest experience from ready to the readiest,” she says.

This campaign includes a series of digital assets followed by TV spots featuring Riggle. Throughout the spring, summer and fall of 2017, Jukin Media’s Readiest compilations and Riggle’s contributions will be featured on holidayinnexpress.com as well as the brand’s YouTube, Instagram, Twitter and Facebook pages. TV was directed by Backyard Productions' Kim Nguyen.