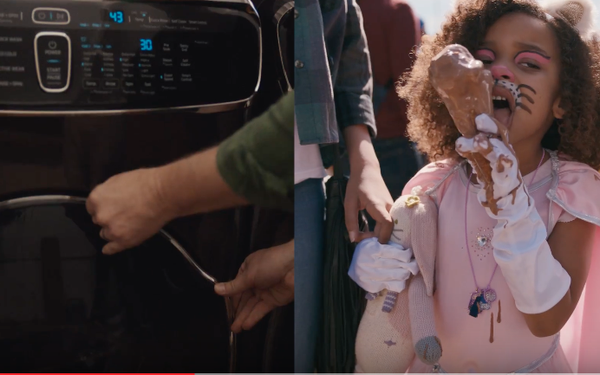 Goodbye, Dax and Kristen. Say hello to the Etnyre family.

For a new campaign touting its Flexwash washers and dryers, Samsung Electronics has jettisoned celebrity spokescouple Dax Shepherd and Kristen Bell in favor of a new, real family to show off the product’s versatility, via a new “Live beautiful” campaign.

“The family is continually evolving and changing,” Katie Cheng, vice president of home appliance marketing and demand generation for Samsung Electronics, tells Marketing Daily. “There’s a huge percentage of non-traditional families  or multigenerational families living together, and you’ve got different dynamics within them.”

The new effort, from agency Adam & Eve/DDB, introduces the Etnyre family, a multiracial family, whose children range in age from babies to teens. Set to Lady Gaga’s new song, “Just Another Day,” an anthemic introductory spot (below) shows a typical day-in-the-life of the family via split screen, with morning exercise routines, make-up and coffee spilled on the way to work, messy ice-cream parties and pottery classes and a playful food fight at the dinner table. Intercut among the scenes is the family using the "Flex" appliances, which have the ability to do two different loads of laundry at once.

“Through all these interactions and course of life, you’re going to get dirty,” Cheng says. “The Etnyres have a ton of laundry needs, and the Flexwash enables them to do multiple loads at the same time. It’s a slice of life to show them.”

The family also appears in shorter, feature-specific spots for the Flexwash and Flexdry systems. One spot depicts the father unloading a laundry basket into a large bin for everyday laundry, and gently taking a blanket from his sleeping daughter (in what looks to be the dog’s bed) for a smaller, more delicate load. Another spot shows of the similar features of the dryer using the mother and teenage daughter.

While praising the humor and reliability of the Shepherd/Bell spots, Cheng says the Etnyre family’s dynamic is a deeper, more realistic way to show off the “Live beautiful” ethos. “[Shepherd and Bell] were great for where we were at the time. It just wasn’t so overtly ‘Live beautiful,” she says. “[The Etnyre’s] have a real dynamic, and that’s what we were going for.”

The family also appears in print executions (which mimic the split screen idea shown in the overarching TV commercial) and in digital videos showing off key features of the washers, Cheng says. The television ads will air in network prime-time programs, sporting events and home improvement cable networks.