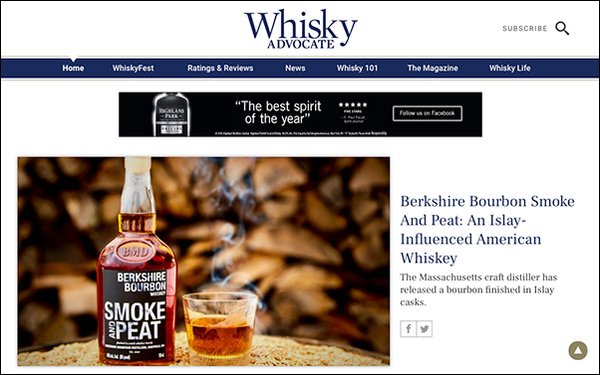 The redesign offers a better user experience across desktop, tablet and mobile.

Marvin R Shanken, founder and chairman of Whisky Advocate parent company M. Shanken Communications, stated, “We recognized a need to create an enhanced digital experience to help whiskey lovers delve deeper into their passion and the world of whiskey.”

Shanken suggested the site's new look is just the beginning, “part of a new chapter for Whisky Advocate."

Barton told Publishers Daily the redesign “is the first step. We can’t share details at the moment, but expect to see much more happening in the digital space going forward.” She added whisky has enjoyed enhanced popularity over the last few years, especially among millennials.

“The variety of whiskies available has grown immensely. New distilleries are opening left and right, and established brands are innovating with creative expressions,” she said.

Barton said the new site “reflects a renewed goal to help people get more out of their whisky,” by focusing more on reviews, lifestyle content and more news coverage of the world of whisky, including distilleries openings and new brands.

The revamped site has updated its ratings feature, with more than 3,500 searchable ratings and reviews on hundreds of different whisky brands. It now has a text search and allows users to search by category (such as Scotch, Irish Whiskey, American Whiskey) and style (Single Malt Scotch, Blended Scotch, Irish Single Pot Still), as well as by price, score, brand and issue, Barton said.

The Whisky Advocate site also has two new sections. One is called "Whisky 101," with important information from basics to expert guides on the liquor. The other is dedicated to the brand’s whisky festival, "WhiskyFest," where readers can purchase tickets and plan for upcoming tastings and events.

The site also added cocktail recipes and videos from Whisky Advocate editors on trending topics, with guests like distillers and blenders.

In April, Shanken became editor and publisher of Whisky Advocate, titles he holds at his other publications: Wine Spectator and Cigar Aficionado.