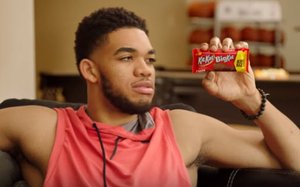 The Big Kat, billed as a “bigger and crispier” KitKat bar, was relaunched last March. The first version of the bar was introduced in the marketplace back in 2012.

To launch its “one-year anniversary” social and digital campaign, KitKat posted a GIF on its Twitter channel of Towns purporting to be “hot and bothered” about the BigKat bar’s name (“there’s only one”). That was followed by a KitKat Twitter challenge to Towns, who plays for the NBA’s Minnesota Timberwolves, asking if he wanted to make a commercial for Big Kat.

Towns responded with an 18-second digital ad, dubbed “Ding,” which was also posted on YouTube (below).

The intentionally amateurish ad was followed by two more — “Jingle” and “Battle” — described in posts as “directed by” as well as starring Towns.

In truth, of course, the ads were actually “co-created” by Towns and Kit Kat, as the brand acknowledged in its press outreach.

Hershey manufactures KitKat for the U.S. market through a license from Nestle.