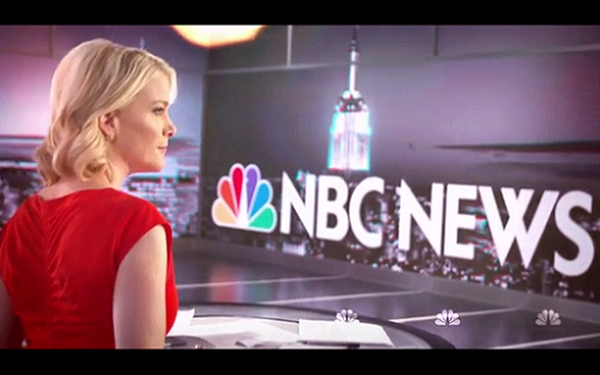 Here’s the scintillating verbiage meant to generate a tidal wave of excitement over Megyn’s pending arrival on the NBC airwaves:

And then Megyn is seen saying earnestly: “We have to tell this story,” although the “story” she is referring to is not revealed.

Then the big finish: “ ‘Sunday Night With Megyn Kelly’ starts Sunday, June 4th, at 7 on NBC.” Interesting phenomenon: I literally just yawned after typing that.

The image above is taken from this promo spot, which you can watch here, courtesy of Deadline.com.

“Sharp, strong journalism.” Now there’s a phrase designed to draw the multitudes to the Megyn Kelly flame. Sharp how? As in “sharp elbows”? Strong how? Odors and weightlifters are strong -- not journalism.

Oh, well. Clearly, good writing in network news promos ain’t what it once were.

It would have been nice if the promo had let us know what the show would be about. Instead, it shows Megyn in various poses, plus other images from NBC News to make it look like she’s making herself right at home over there.

The image above, for example, with “NBC News” spelled out in big letters, seems to be designed to taunt Fox News, as if to say: Hey, Fox News, how do you like your top star now?

Certainly, this is likely only the first of many promos to come. Soon, additional promos will be rolled out as part of the Megyn Kelly buildup that might give a hint into the stories or interviews she has planned.

And you can bet your bottom dollar The New York Times will get an interview with her and then produce the world’s biggest puff piece just in time for her NBC debut.

Rumors have been circulating that her big “get” is an interview already in the can with Vladimir Putin, in which Megyn may have interviewed the Russian strongman while the two rode on a horse. Was Putin shirtless? Stay tuned.

While more will be learned in future promo spots about how NBC News is positioning Megyn Kelly in advance of her big premiere June 4th, this first salvo illustrates how big TV networks can sometimes take a unique personality -- in this case, Megyn Kelly -- and homogenize her.

So it’s Sunday night, and Megyn Kelly is on it. So what. Where’s the pizzazz? Where’s the razzle-dazzle? Where’s the exclamation point? Why not call it “Megyn!”? Or “The Megyn Hour!”? Or “Live! With Kelly, Megyn.”

The name of her old show on Fox News, “The Kelly File,” was pretty good. Too bad NBC couldn’t acquire that too.

Megyn’s debut at the onset of the summer TV season indicates that NBC has full confidence that she’ll do OK against reruns of “60 Minutes.” It’s a fine place to start for their newest star, who appears to be growing her hair back after defiantly cutting it short on Fox News (some time last year, if memory serves).

Let the record show that the TV Blog has nothing but hope for Megyn Kelly in her new life at NBC News, on Sunday night or any night.