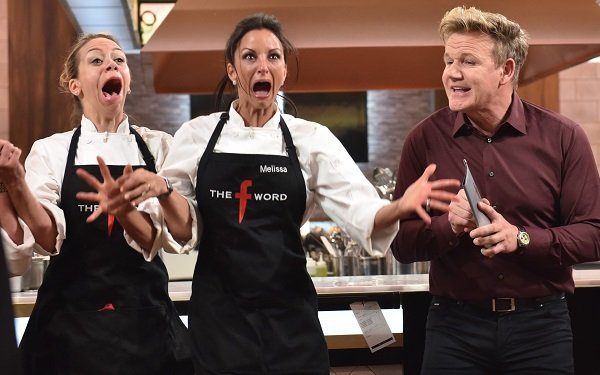 And the award for the worst title on a current TV show goes to … “The F Word” on Fox!

Please join me in congratulating the lovely people in the Fox programming department who applied a phrase whose off-color meaning everyone knows to a show that is supposedly aimed at families.

For its part, Fox is not positioning this “F” as standing for you-know-what. In promoting the show, the “F” stands for food, family and fun. The official title of the show is “The F Word With Gordon Ramsay.”

In his other cooking shows -- most notably “Hell’s Kitchen” on Fox -- Ramsay is famous for blowing his stack and screaming the real f-word. The word is always bleeped, of course, but everyone knows what Ramsay is saying.

“The F Word With Gordon Ramsay” (pictured above) premiered last week for a summer run Wednesday nights at 9 Eastern. The show has “foodie families and friends [battling] it out in an intense, high-stakes cook-off,” according to Fox’s press material. Wow, that sounds #$@&%*! intense!

It may or may not be as intense as it sounds. After all, it’s all in good f-- (fun). But it is another step in the mainstreaming of the f-word on television, although we’re not at the point yet where the TV Blog feels comfortable spelling it out.

As a human being living on the planet Earth today, your TV blogger is well aware that the f-word and all of its variants are in wide, common use today.

Just the other night in a restaurant in New York, a young woman sitting nearby who was talking too loudly anyway used the f-word in a conversation with her date.

An older diner sitting nearby shot her a dirty look, and incredibly, the young woman actually apologized. Inside voices, please!

TV is unapologetic, however, in its resort to profanity that was once verboten but not anymore. Basic cable, for example, has discovered the s-word -- another four-letter word George Carlin listed in his famous bit he called “Seven Words You Can’t Say on Television.” Nowadays, the s-word has broken out all over the place.

As a matter of fact, so has the f-word, most notably on FX shows such as “Fargo” and “FEUD: Bette and Joan.”

The TV Blog points these things out from time to time not out of any prudish notion that the TV industry will take note and watch its language, but simply because it’s there. It’s a trend, and by gosh, the TV Blog intends to continue chronicling it.

Just the other day, a billboard was spotted in Manhattan near the Queensboro Bridge that advertised the CNBC show called “The Profit,” the reality series about a man who invests in troubled businesses and helps the owners turn them around. The tagline on this billboard: “He gives a buck!” Clever.

“The F Word With Gordon Ramsay” is a clever title too, but that doesn’t mean it isn’t wholly tasteless at the same time. Let the record show that the TV Blog objects.

As for the “award” cited at the top of this blog for Worst TV Show Title, readers might be interested to know that there was a runner-up in this contest -- the HGTV series called “Flipping Virgins.”

This is a series about first-time, rookie house-flippers. In the title, the word “flipping” is not a verb but a noun. It does not necessarily read that way, however.

No one should really be flipping out over this title or any other one. But if you are tempted sometimes to flip the bird at your TV set, then the TV Blog totally understands.

tv
4 comments about "Fox Titling Of Family Show 'The F Word' Is So Effed Up".
Check to receive email when comments are posted.
Read more comments >
Next story loading