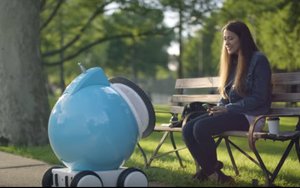 Last month, Oreo launched its own crowdsourced flavors contest, #MyOreoCreation, in conjunction with the release of a “Firework” limited-edition flavor.

Three finalist flavors will be in stores next May, followed by determination of the winner in July through consumer voting. The winner will receive $500,000 and get to preview unreleased Oreo products.

Since the contest was announced, and through the entry deadline this July 14, some 60 influencers, including Freddie Prinze Jr., are engaging fans to feed awareness and entries. The brand has been monitoring submission ideas and also directly engaging with entrants in a variety of ways, such as GIF responses via social.

Now, Oreo is demonstrating its genius for keeping the buzz going by surprising some contest entrants out in the real world.

A few entrants will get a custom, two-cookie sample of their own #MyOreoCreation submission idea delivered to their homes.

Further, some of them will have those samples delivered by a 2’ X 2’, remote-controlled robot on wheels. The bot has an “Oreo Wonder Vault door” that opens to offer the fan the sample, on an extendable tray (video below).

Meanwhile, Oreo is also getting plenty of attention on a separate front. Parent Mondelez International, in partnership with Post Consumer Brands, has brought back Oreo O’s — an Oreo-flavored cereal launched in 1998 but discontinued in 2005.

The companies cooperated to revive the cereal at the request of Wal-Mart, which has a 90-day exclusive on it.