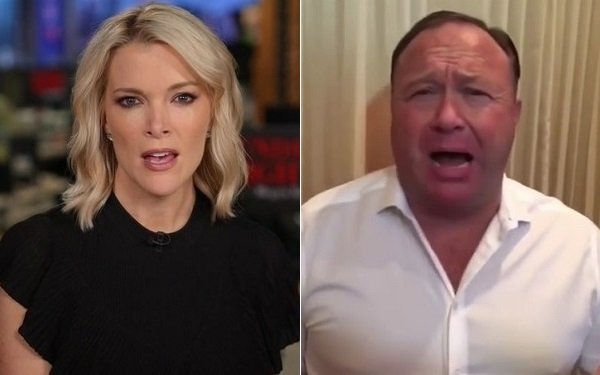 Megyn Kelly made Alex Jones look like an idiot. And if that was the goal of the segment seen Sunday night on NBC, then mission accomplished, Megyn.

The fact is, that has to be the goal of a TV news-magazine story such as this one. Nothing could have been gained by either Megyn Kelly or NBC News by holding back on expressions of skepticism or out-and-out incredulity in the face of this interview subject's contorted excuse-making for the far-out assertions he has made about various subjects, most notably the Sandy Hook Elementary School massacre.

The best approach was to call him out on all of them, and in the process, make him look ridiculous. And that's what Kelly did throughout the 17-minute segment that aired on the third edition of her new show, “Sunday Night with Megyn Kelly.” Way to go, Megyn.

With the preponderance of evidence on her side -- namely, videotape of Jones making ill-informed (to say the least) statements about terrible events he apparently knows nothing about -- Kelly blocked every attempt he made to blame other media.

He would derisively bandy about the phrase “mainstream media” -- or “MSM,” as he calls it -- as a way of explaining why he says the things he does, and she would stare at him like he was a two-headed chicken.

“Ninety-five percent of what we cover is looking at a news article and then, you know, discussing it,” Jones said to her at one point.

“But you know, if you just look at an article and discuss it, it's garbage in, garbage out, right?” she replied, reacting in much the same way as anyone with half a brain would. “If you haven’t ascertained the veracity of that article, and it's all BS, and then you spend two hours talking about it, then you've put out a bunch of misinformation. I’m just trying to figure out what the vetting process is.”

Of course, what Kelly was clearly demonstrating was that there is no vetting process. There's just Jones glancing at an article and/or its headline and then espousing on it with opinions based on no facts whatsoever.

As the segment made clear, the main angle of this report on Jones and his Infowars media empire was to point out that even though Jones’ pronouncements are more than enough to convince most normal people that this guy is mentally unhinged, the president of the United States seems to find him to be a credible source of “alternative” news.

This was the ostensible point of this story all along. And yet, NBC’s pre-show publicity was so inept last week that most people formed the impression that Kelly was poised to produce a puff piece about this kook.

What they should have done is issue press releases with headlines such as: “Who is this nut? Megyn Kelly exposes fringe figure President Trump apparently adores.” Or “Megyn Kelly turns over rock in search of slug and finds Alex Jones” -- that sort of thing.

Instead, the public got wind of Kelly’s intention to interview this guy and figured she would be granting him an opportunity to issues his outrageous opinions unchallenged.

These include his contention that the Sandy Hook massacre was a hoax and that the bombing of the Ariana Grande concert in Manchester, England represented some kind of poetic justice because, he said, the victims were liberals who are soft on Muslim immigrants.

So Kelly had to absorb all kinds of complaints about the story before it even aired. Now that it has aired, it turns out it was a great story. If only NBC had bothered to assign someone competent to the job of positioning it that way last week.