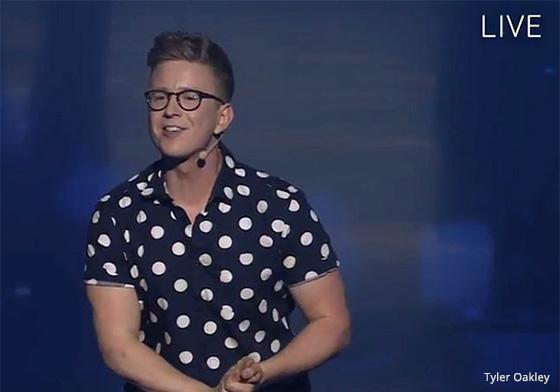 In a first from Anaheim, California, YouTube teamed up with VidCon producers to bring live entertainment to kick off the 2017 conference. YouTube OnStage wasn't just a live show. It was a well-choreographed production. The show streamed live on YouTube Wednesday evening to an audience of screaming fans and was quickly indexed in Google search results.

Todrick Hall, with 2.5 million YouTube subscribers, opened the show with a snazzy number. The message, "You put the 'Y-O-U' in YouTube," in the opening performance carried the weight of an industry moving to live-streaming content online to supplant television.

Tyler Oakley, whose channel has 7.2 million subscribers, hosted it. "Please use the hashtag #YouTubeOnStage, because I will be stalking you," Oakley said in his opening remarks, as he continually moved from directly addressing the live audiences to those looking on through the live stream.

Kellogg Pop-Tarts sponsored the first show. And why not? Some 81% of those watch more live video in 2016, compared with the prior year, according to stats from Livestream and New York Magazine, which surveyed around 1,000 adults to learn how consumers think about live video.

Sixty-seven percent of audiences who watch a live stream purchase a ticket to a similar event, and 87% would prefer to watch video online if it means they will have access to more behind-the-scene content. About 57% said the quality of the content is the most important factor.

YouTube OnStage provided much quality. Brooklyn & Bailey, who have more than 4 million subscribers to their YouTube channel, said they grew up on YouTube. The talent introduced Grace VanderWaal, who sang "I Don't Know My Name," an original song that won her stardom on "America's Got Talent." Wednesday night, she debuted a new song titled "Moonlight."

At times some of the talent seemed to struggle with addressing the large crowd, but the audience didn't seem to care.

Some of the talent seemed more comfortable in front of a large audience. Each tried to personally address the audience of screaming fans. One magician pulled in three women from the audience, and each fan who caught a t-shirt would join him onstage to participate in the show.

At the end of the 90-minute live show, the fans continued to scream for more. But in the words of Oakley, "Bye, ya'll." Until next time!