At Last, Nightmare Of Awful 'Fargo' Season Ends On FX 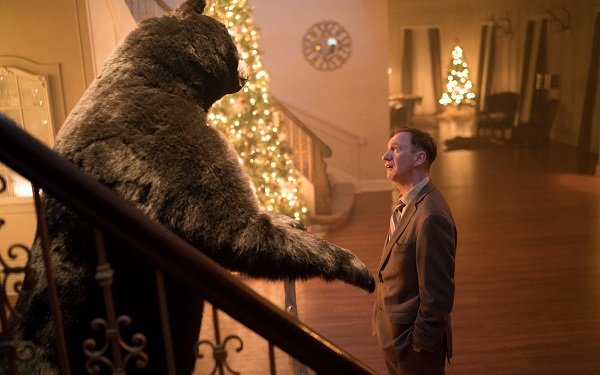 Well, that was disappointing -- surprising too because I had held out some slim hope that somehow “Fargo” would redeem itself in the season finale that aired on FX Wednesday night.

Alas, that did not happen, and we were left trying to guess the answer to a big question that hung in the air as the season came to a close.

This had to do with whether or not the dentally challenged arch criminal known as Varga (David Thewlis, pictured above) would escape the clutches of the former sheriff from Minnesota played by Carrie Coons.

The final scene in Wednesday's finale to this third season of “Fargo” (Episode 310, if you're keeping count) was a coda of sorts suddenly presented as occurring five years after the season's time frame, which I believe was 2010.

In this added-on scene, the sheriff character was now working for the U.S. Department of Homeland Security and Varga, a Briton, was being detained at JFK Airport. There, in an interrogation room, the ex-sheriff declared that she finally had him, while he insisted that some unknown authority figure would soon walk through the door and free him.

Then the show ended with no resolution, which might have been frustrating if I had cared. The problem was, I had ceased caring about these characters long ago and was only watching this season to the bitter end out of a sense of professional obligation, since I had already railed about its deficiencies in several columns already.

Among these was its inexplicable focus on Jews who were portrayed as money-grubbers and “fixers.” Two were killed and a third was poisoned. He didn't die but was permanently crippled.

At other times, there were stories told about Russian pogroms and the killing of Jews. How these connected to the show's storyline -- which involved this Varga character coming to town and muscling his way into taking over a parking lot company -- was never made clear.

Let the record show that the season finale contained a surprise “reveal” -- that it was the wealthy widow who was behind Varga and the takeover of the parking-lot empire all along. Her name was Mrs. Goldfarb. Oy vey!

I do remember making a note at some point while watching Episode 8 that a Volkswagen had turned up as a means of providing an escape for two of the show’s criminals who were then desperately in need of a means for lamming it. “The irony [of using a VW Beetle in this show in which the persecution of Jews was an obsession] is noted,” I wrote then.

Not only were characters and storylines set adrift with no satisfactory conclusion (such as the Russian thug who lost an ear), but this show was gratuitously disgusting.

We can all debate the necessity for scenes of graphic violence in TV shows and movies with an eye toward determining whether they add to or subtract from the plot or the experience of watching a film or TV show.

Some time while watching Episode Five, I wrote this sentence in my notes: “I have to conclude that this is the worst show of the year. It is unrelievedly disgusting.”

No other notes follow to indicate what precipitated this statement. However, while watching Episode 8, I noted a few examples.

These notes point out that in quick succession, one character was seen standing over a toilet urinating, followed closely by a scene showing Varga taking a phone call while sitting on another toilet and, well, doing something else. “What a horrible show this ‘Fargo’ is,” I wrote at the time.

During Episode 9, it occurred to me that the makers of “Fargo” have raised the depiction of murder and the bleeding that results from it to heretofore unprecedented levels of fetishism.

My notes refer to a scene in which a man was suddenly shot to death in his kitchen while removing a container of milk from a refrigerator. The result was a pool of red blood mixed with white milk that seemed to have been filmed lovingly as it spread slowly from beneath his body onto the kitchen floor.

This theme recurs in my notes for the finale, which I watched in advance of its airing on Wednesday night. “Another fetishistic pan over a man's dead body,” I wrote, “in this case, a state trooper.”

In the end, this third season of “Fargo” was a meaningless gore-fest that had nothing to say about violence, law-breaking or our world in general.