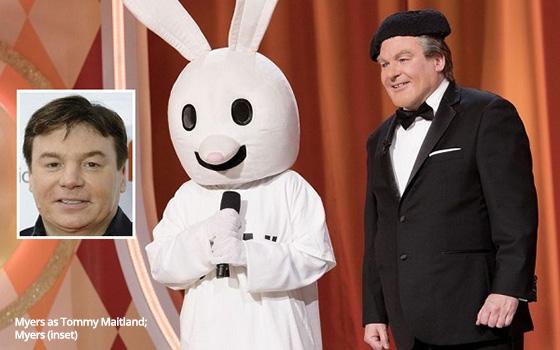 Well, isn’t he a cheeky monkey!

That phrase -- or at least the “cheeky monkey” part -- was heard last week uttered by the flamboyant Brit who’s hosting the new version of “The Gong Show” that premiered last Thursday on ABC.

The host's name is Tommy Maitland (seen at right in the photo above). According to an elaborate bio on the ABC Web site -- ABC.Go.Com -- Maitland is 72 and has had a long career as an entertainer, emcee, comedian and “presenter” (as the Brits refer to people on TV such as newscasters and the like).

The bio is very detailed and full of place names and other proper nouns that at least read like they’re real. Hats off to whoever wrote it. The whole thing is apparently fake, however, since “Tommy Maitland” turns out to be Mike Myers in deep costume.

For the record, the fact that it’s Myers (inset photo above) playing Maitland has reportedly never been confirmed by anyone. According to various stories online, ABC won’t confirm it when queried by reporters. And Myers’ name does not appear anywhere in the “Gong Show” credits.

In a review posted here last week, I dismissed “Maitland” as a “leering Englishman” and said of him: “Of all the acts on ‘The Gong Show,’ it is Maitland who deserves most to be gonged."

Ha, ha -- the joke’s on me. Or is it? This week, as the news that Maitland is really Myers is making the rounds, some are questioning the wisdom of Myers taking on this role in a summer TV series that represents the very worst of what TV has ever offered.

“Desperate” is the way at least one story described the move -- implying that Myers, who was once on top of the movie world with his “Austin Powers” movies, is now so desperate for a new hit that he has created yet another “cheeky” Englishman character in the hopes that cheeky lightning will strike twice.

Last week’s “Gong Show” premiere -- airing from 10 p.m. to 11 p.m. Eastern on ABC on Thursday – drew 3.8 million viewers. In the days since then, there has been no discernible groundswell of interest or affection among this group for Mr. Tommy Maitland.

Or maybe there is such a groundswell, and like the possibility that Tommy Maitland was really someone else in costume, a heightened level of interest, perhaps expressed on social media, has not trickled down (or up) to me. Truth be told, the older I get, the more these things tend to pass me by -- which is fine with me.

For example, I only got wind of this Myers-as-Maitland story late last week because someone who read my “Gong Show” review made the effort to find my private email address online and let me know about it.

Thank you to that person for doing it so politely. Usually, emails of this type begin with a salutation along the lines of “Hey, idiot” or worse.

Well, now I know: “Tommy Maitland” is really Mike Myers. As for the rest of the people on last week’s “Gong Show” -- judges Will Arnett, Ken Jeong and Zach Galifianakis -- they looked real enough to me.

tv
2 comments about "Mike Myers Is A Cheeky Monkey As Host Of New 'Gong Show' ".
Check to receive email when comments are posted.
Read more comments >
Next story loading