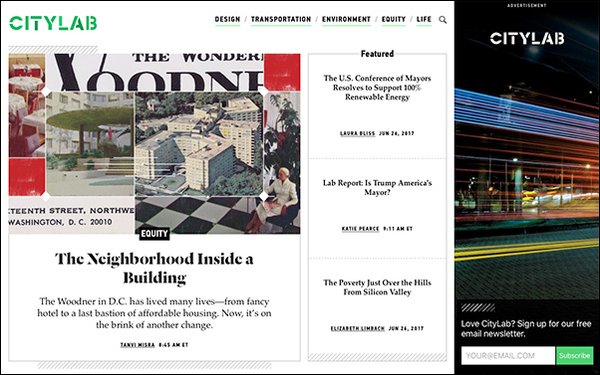 The updated site will no longer feature programmatic advertising; it will focus on native advertising and custom ad units.

In a post announcing the changes, CityLab executive editor David Dudley said the site has “eliminated one of the more-despised features, based on reader feedback—the advertising that appeared mid-post and interrupted the reading experience. Ads in stories (in desktop layout, at least) will now be limited to the right rail of the page, where they can be fully admired or ignored. You’re welcome.”

CityLab’s photos, maps and images are bigger, he added. There are also new typefaces and an "attention-demanding traffic-light green” for the redesigned logo. “We’re edging further away from raffish, blog-style content of yore and seeking a cleaner, sharper, more mature vibe.”

Dudley has been serving as interim editor since Sommer Mathis left a few months ago to become editor of Atlas Obscura. Mathis was the site's editor since it spun off from The Atlantic in 2011.

Next week, Nicole Flatow will become the permanent editor of CityLab. She previously served as U.S. enterprise editor at The Guardian. Before that, she was deputy justice editor and senior editor of ThinkProgress.

CityLab’s redesign, which is its second update since launching, appears to reflect a shift. It gives the site more independence from The Atlantic.

CityLab also announced today it is getting its own dedicated marketing, sales and product teams. Previously, it shared those teams with The Atlantic.

“Cities are now the engines of innovation, global culture, and our economies,” stated CityLab general manager Rob Bole. “In order to capitalize on this moment, CityLab has refocused its editorial and revenue strategies on how cities are succeeding in creating solutions to 21st-century challenges."

He added Flatow's experience would "grow our urban-based solutions journalism and expand our use of data and visual storytelling to report on important urban stories.”

Going forward, CityLab says it plans to add additional newsletters to its lineup. It is also developing a live events series that will “take CityLab’s journalists and experts off the stage and into the community,” per a statement.