No One Will Be Shocked When Comedian Slams National Anthem 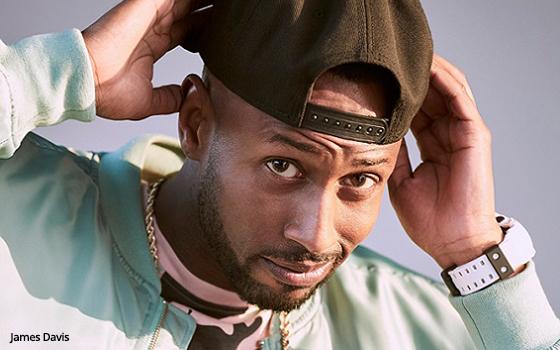 If not for this week’s famine of potential subjects for the TV Blog, this show premiering Wednesday night on Comedy Central -- “Hood Adjacent with James Davis” -- might never have emerged as a candidate for a review.

June has always been a historically fallow month for subject matter where the task of writing about television is concerned. And the week leading up to the Fourth of July has always been the fallowest of the fallow.

So here we are: Turning our attention to another show premiere on Comedy Central featuring a comedian no one my age has ever heard of headlining a show based -- however loosely -- on his life.

Comedy Central seems to premiere a show like this every other day or so, and I tend to ignore them just as frequently -- not because of any animus toward Comedy Central, but usually because I never seem to know in advance about these shows and their premiere dates. Alas.

Somehow, though, I got wind of this one. And lo and behold, what do we have here in the very first episode that Comedy Central provided for preview? This comedian, James Davis (pictured above), slams our national anthem, of which he apparently does not approve.

Introducing a segment about the anthem, Davis, an African-American, says of our hallowed “Star-Spangled Banner”: “The national anthem represents everything this country was founded on -- white entitlement!”

He delivers this line before an audience assembled in a TV studio designed to resemble a comedy club setting. The audience reacts predictably with laughs, clapping and cheering.

Once upon a time, in the era of mass media -- when there were only a handful of TV networks and big newspapers and magazines whose opinions actually mattered -- this story would have been played prominently.

I can just imagine bringing this story to the editors of the news pages at the newspaper where I once worked. Depending on whatever else was going on in the world that day, I am fairly confident they would have found a way to play this story with an “Outrage” headline somewhere near the front of the paper.

Today, however, media is so fractured that this kind of story has no impact anymore. The audience for this show will likely be relatively minuscule -- particularly when compared to what TV shows used to draw.

From a TV columnist’s perspective, that’s one of the biggest differences between the world we live in now and the world as it was, say, 20 years ago. If a comedian had come on a big network in the ’90s and criticized the national anthem, a New York tabloid could make a great deal of hay with a “shock” story on the subject -- especially on a slow news day.

Today, no one gets shocked anymore. And on a show like “Hood Adjacent,” the comedian is preaching to the choir anyway.

The title of the show refers to Davis’ self-proclaimed status as an outsider in the proverbial ’hood. He says he grew up next to, but not within, the storied South Central area of Los Angeles. This is the gimmick that underpins the show.

The debut episode of “Hood Adjacent” has Davis entering the aforementioned ’hood to see if he might learn how to fit in. There, he encounters various locals who school him in ’hood mannerisms and etiquette. As travelogues go, this one is dull indeed.

In fact, it wasn’t especially disrespectful of the song at all, which is to say that the video was not in conformity with Davis’ disapproval of the anthem. Or at least that’s how it felt to me.

The half-hour premiere of “Hood Adjacent” had Davis doing on-the-street interviews with people apparently celebrating Mardi Gras in New Orleans in which he attempted to persuade them to utter the dreaded n-word.

The segment was titled “Ruin Your Life,” which Davis posited as the inevitable outcome of uttering the n-word on national television.

But that presupposes that there is still something out there that we can still refer to as “national television.” Maybe there is, such as the Super Bowl, for example.

But “Hood Adjacent” doesn’t qualify. So, to the young woman who uttered the n-word on-camera in this segment, I have this to say: Your life is far from ruined since hardly anyone will see this.