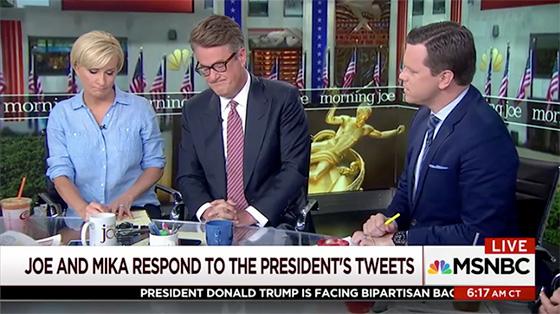 Donald Trump’s staff said he would use his influence at the National Enquirer to get the tabloid to pull an unfavorable story about Joe Scarborough and Mika Brzezinski, cohosts of MSNBC’s “Morning Joe.”  But it reportedly came with a caveat.

That is, provided the duo started to pull their punches on the President. That’s according to an op-ed piece in The Washington Post, in which the cohosts (who are also engaged to be married) claim they were approached about a quid pro quo to nix criticism.

They followed up with more details on the Friday morning episode of their show.

The strange revelation came as Scarborough and Brzezinski are locked in a high-profile war of words with Trump, following a controversial tweet by the President attacking the couple. Trump claimed they wanted to have dinner with him at his Mar-a-Lago estate as Brzezinski was supposedly recovering from cosmetic surgery.

Trump tweeted she was “bleeding badly from a facelift” and he declined.

In response, the couple published an op-ed piece in WaPo in which they revealed: “This year, top White House staff members warned that the National Enquirer was planning to publish a negative article about us unless we begged the president to have the story spiked. We ignored their desperate pleas.”

On Friday morning, they elaborated on their show, with Scarborough describing the calls from White House staffers: “They said if you call the President up and you apologize for your coverage, then he will pick up the phone and basically spike the story. I had, I will just say, three people at the very top of the administration calling me.

"And the response was like, ‘Are you kidding me? I don't know what they have. Run a story. I'm not going to do it.’ ” Brzezinski additionally claimed that reporters from the National Enquirer had harassed her children during this period.

For his part, Trump tweeted a different version of events, claiming Scarborough contacted his staff about getting a story quashed — rather than vice versa — but he refused to help.

The National Enquirer also issued a statement: “At the beginning of June, we accurately reported a story that recounted the relationship between Joe Scarborough and Mika Brzezinski, the truth of which is not in dispute. At no time did we threaten either Joe or Mika or their children in connection with our reporting on the story. We have no knowledge of any discussions between the White House and Joe and Mika about our story, and absolutely no involvement in those discussions.”

The National Enquirer is owned by American Media Inc., whose CEO David Pecker is a well-known friend and supporter of Trump.