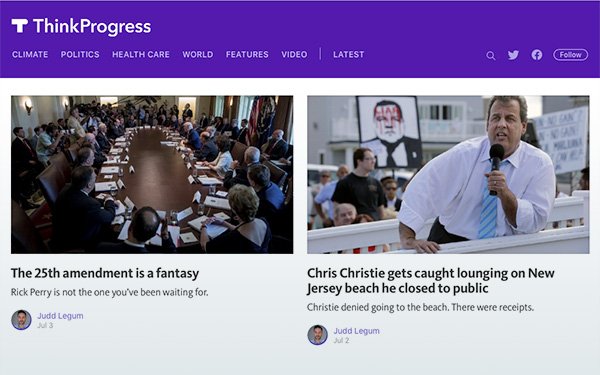 Nonprofit digital-news site ThinkProgress is moving its content back to the WordPress platform. That's less than a year after it migrated to online-publishing platform Medium.

Beginning August 1, ThinkProgress will no longer publish on Medium, founder and editor-in-chief Judd Legum told Poynter. Commenting on the decision, he said: "I'm certainly not eager to have a bunch of ads on the site — and we're not going to. I'd love to have none. And if it were possible, I'd be interested in figuring out a model where we don't have to have any."

Poynter adds ThinkProgressrecently completed a $500,000 crowdfunding campaign, calling on readers to "Support the Trump Investigative Fund." It is devoted to holding President Trump accountable, fact-checking his administration, tracking any conflicts of interest and filing Freedom of Information Act requests.

Legum said he will use those proceeds to grow the staff by 30%.

When ThinkProgress moved to Medium, Legum told CNNMoney the decision was instigated by the difficulty of hosting its own site and competing with Facebook's new News Feed algorithm.

“It's really impossible for an independent publisher to develop and maintain its own publishing platform in this environment,” Legum said. He added that most of ThinkProgress’ tech resources were spent on making sure the site didn't crash.

“Now, we can let Medium develop the technical product, and we can focus on writing stories,” he said.

Separately, Medium has been making its own news.

In January, Medium announced it was laying off 50 employees, about one-third of its staff, and ending its branded-content business, “Promoted Stories.” The company says it is working on building a new business model. In June, Medium debuted its first original video series, called “Noteworthy.”

ThinkProgress is not the first publisher to leave Medium, but it is the biggest. Since Medium shut down its advertising services, Pacific Standard, The Ringer and Film School Rejects have also left the platform.

Medium was created by Twitter cofounder Evan Williams in 2012.