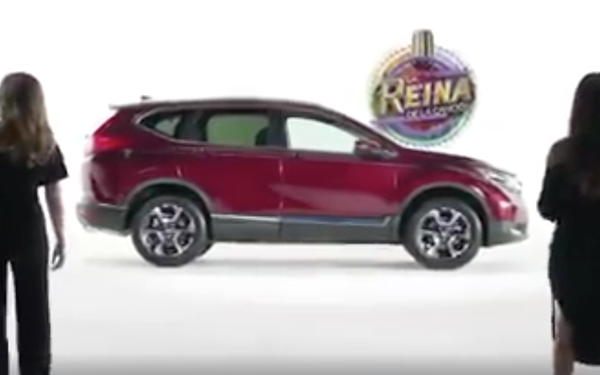 Two automakers have focused recent efforts on capturing the attention of the increasingly important Hispanic consumer.

Meanwhile, Chrysler is launching a new campaign from Alma DDB to share key features of the all-new Chrysler Pacifica with Hispanic customers. “Hero” is a 30-second commercial featuring Pablo, a young boy attempting to impress the girl next door. Pablo utilizes Pacifica’s functionality, versatility, technology and bold styling to make the ride to school with his neighbor much more special. “Hero” will run across television, digital and social channels and will be also available on the Chrysler brand’s official YouTube channel.

Honda’s program, created by RPA, aligned with the brand’s core belief in “The Power of Dreams,” which is the courage and conviction to imagine and make dreams a reality. The program enabled Honda to help “La Reina” contestants not only pursue their dreams, but also share the stories of how they are working toward achieving them.

Throughout the nine-week music competition, which ended in late June, Honda has been supportive of their journey via in-show moments like “El Salón de los Sueños” (the Room of Dreams) where the contestants shared their dreams and goals, and “El Respiro” (Catch Your Breath), a brand owned moment where Honda gives the contestants a moment in the CR-V to re-center and get back in the game.

The multiplatform program was part of the Honda brand’s support of the all-new Honda CR-V SUV. It spotlighted the vehicle to a dedicated audience — 95% watch live among adults 18-49 — in a distinctive way on one of Univision’s most socially engaging programs, says Phil Hruska, manager of media strategy at American Honda.

Honda’s partnership with Univision and its breakout hit, "La Reina de la Canción," is more involved than previous efforts with the network, he adds.

“Honda leveraged the insight that the Hispanic audience embodies ‘The Power of Dreams’ – the core belief of the Honda brand in having the courage and conviction to imagine and make dreams a reality – each with their own inspirational story on how they strove to meet their goals and aspirations, as well as the family and community that rallied behind them,” Hruska tells Marketing Daily. “Honda dove into the content of 'La Reina de la Canción' dialing in on the power of each contestant’s dreams, their paths to get to this point, and pulled on their ties to their community, sharing with the audiences these many aspirational and inspirational stories.”

Honda also trusted in Univision as a partner to have their pulse on the type of content audiences are seeking out and engaging with, such as their passion for Regional Mexican Music and more contemporary story lines, he added.

According to Nielsen TV Brand Effect, Honda standard ads are over-performing in the Spanish language TV auto category ads during this time period.

“Along with the CR-V SUV, Civic and Accord sedans are Honda’s top selling vehicles with Hispanic customers, and the brand will continue to develop unique programs and campaigns to further engage the growing segment of Hispanic buyers,” Hruska says.

Honda was one of the most involved partners with "La Reina de la Canción" and not only highlighted "The Power of Dreams" for the contestants, but also that of the host, Alejandra Espinoza, via the web series “Ale la de Tijuana.” The five-episode series highlighted her personal journey and how she, too, believes in "The Power of Dreams."