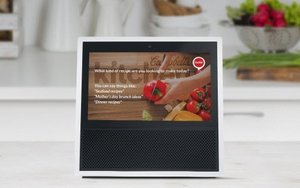 Campbell is among the first brands to offer a visually enabled skill on Amazon’s new Echo Show touchscreen device.

Campbell was also among the first food companies to use Alexa voice technology to launch a skill in 2015. Since then, the original Campbell’s Kitchen Skill has attracted more than 50,000 unique sign-ups and suggested more than 174,000 recipes, according to the company.

The skill offers simple navigation of touchscreen-enabled content for more than 3,000 Campbell recipes, including the ability to search by recipes’ main ingredients, cuisine type, prep method and effort level. Users can also send recipes to themselves via email.

Food skills, along with news and entertainment video, dominated the fewer-than-10 visual skills that were available at Echo Show’s launch in late June, because the visual capability is a particularly crucial advance for the food category, points out VentureBeat.With voice alone, the Echo skills from the Food Network and other brands were still being “blown away by experiences on the web or in an app, because people want to know what food looks like,” notes the site.

In addition to Campbell’s Kitchen and Food Network, food-related skills that have been updated with visuals include Allrecipes, OpenTable, Starbucks and Nutritionix, among others.