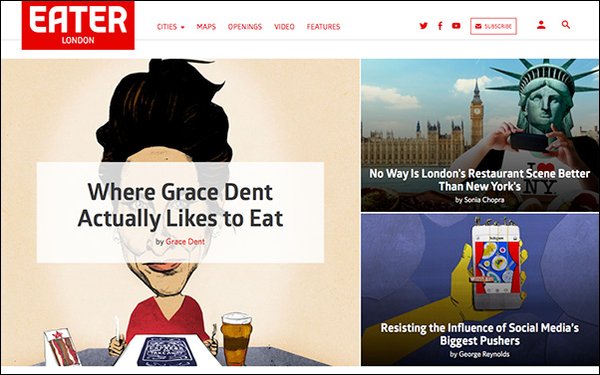 Vox Media’s food site Eater is expanding internationally with the launch of Eater London, its first digital publication based outside of North America. It is the company's first new 'Eater' site since 2013.

Eater London will cover the local food scene in the city, from openings, closings and chef shuffles to maps and guides. At launch, stories include news about a new Shake Shack opening on Cambridge Circus, a list of the 38 best restaurants to go to in London this summer, and the 14 hottest restaurants this month.

Eater brand editor-in-chief Amanda Kludt wrote in a post announcing the new site: “Why, out of all of the innovative culinary capitals in the world did we settle on London, a city that was until recently, as Adam writes, “the gastronomic laughing stock of international cities”?

"Because now, in 2017, London’s restaurant scene is dynamic, it’s multicultural, it’s boundary pushing, it’s filled with chefs taking inspiration from culinary movements around the world and translating them for this vibrant place. Also, everyone speaks English.”

Eater has 23 sites across America and Canada.

In other food and drink-related news, Hearst Magazines International is partnering with Franchise India Holdings Ltd. to open whiskey lounges across India under its Esquire brand. Though Esquire is not published in India, Hearst Magazines does publish editions of Cosmopolitan and Harper’s Bazaar in the South Asian country.