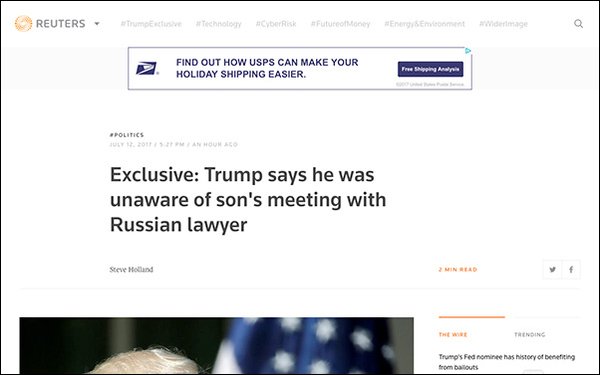 Reuters is introducing three new advertising units and a redesign for its article pages.

The ad solutions are built to increase consumer engagement and retention and will supplement Reuters’ existing ad units.

Canvas ad units are bold, full-width branding placements that will echo the quality of magazine advertising but on a digital format. HP Inc. and Synchrony Financial are the first clients for the new Canvas ad units on Reuters.

The redesign will only affect article pages, often the focus of publishers, given the downward trend in traffic to home pages. That's due to readers heading straight to articles from Facebook and Google.

The redesigned article pages will put more emphasis on Reuters' imagery. The pages are now fully responsive, load faster and are optimized across platforms.

A simplified navigation has a trending topics section at the top of each page formatted as hashtags, rather than vertical sections (for example: "#WrayLive" and "#CyberRisk" rather than "Politics" and "Tech.")

Showman stated: “The article page redesign is central to upgrading the Reuters.com user experience." He called the "refreshed and simplified look" an opportunity to better showcase Reuters journalism.

The redesign was created by digital agency Ueno. It has been adopted by all editions of Reuters.com except for Japanese and Arabic language sites, which will be updated later this year.