O.J. Parole Telecast Had Suspense, Thrills And A Surprise Ending 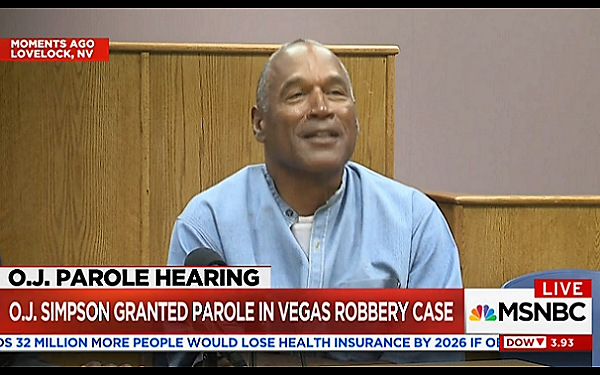 Whether or not the eyes of the entire nation were riveted on every variety of video screen on Thursday for the parole hearing of Orenthal James Simpson won’t be known until someone tallies up the audience -- if that is even possible.

Not that long ago, a day-after TV column commenting on a televised news event like this one would be all about TV -- how many networks carried it, who they were, and what some of them did that was noteworthy or different.

Once upon a time in a newspaper office some years back, I actually had a device hooked up to my television set that split my screen into four images, so I could watch four networks at a time during times of breaking news. This device had been designed for security camera systems but it worked on a TV set too.

Nowadays, however, a summation of who aired what during an afternoon live event such as O.J.’s parole hearing is not really relevant. People today generally know where to find their live news content no matter where they are. And they don’t need a TV set to do it.

As it happens, even I don’t watch these things on TV anymore. For trivial reasons, I ended up sticking with MSNBC.com throughout this unusual live telecast.

I did make a check of my TV at some point during this two-hour show and found that the hearing was carried live on just about every network you would expect. As mentioned in yesterday’s TV Blog, that included ESPN.

This was one fascinating telecast. It was the only parole hearing that I can recall in my entire 34-year career writing about television that was so momentous that it rated national live coverage and probably the attention of millions.

On Friday morning close to midday, someone will circulate some data about that audience, but I’ll wager it will be television-only data. And if that’s all it is, it won’t be accurate as a measure of this event’s total audience.

Whoever watched it got an eyeful. They even got a surprise ending. While many had predicted in the days before the hearing that Simpson would likely win his parole, it seemed much less clear-cut during the actual hearing.

The view from here was that Simpson was in danger of blowing it. In his statements to the four-member Nevada Board of Parole Commissioners, he seemed to take little or no responsibility for his actions, reiterated claims he has made many times that seemed to blame others for putting him in a position to commit this attempted robbery in Las Vegas, and even showed a flash or two of anger.

He even admitted to breaking a promise he had made to the board previously to attend AA meetings to address a drinking problem. As a spectator watching this hearing, I felt that admission alone would earn him an extension on his prison stay.

As it turned out, however, many of his statements had no bearing on the panel’s eventual decision to grant his parole. They granted it based on his pristine prison record, the fact that various people were vouching for him, and also because he seemed to have a stable home life awaiting him when he got out.

Still, viewers had to cringe when O.J. would sit there and insist he’s a guy who has “led a conflict-free life,” and never “lived a criminal life,” as he put it.

Sure, he was acquitted in the double murders of his estranged wife Nicole and her friend, Ron Goldman, but most people think he did it. Plus, plenty of the O.J. documentaries that have aired on TV this year have included Nicole’s calls to 911 when a very angry O.J. was threatening her.

And so, the board’s decision to set him free did come as a surprise. It came after a build-up of suspense lasting about 20 minutes from the time the hearing ended. All told, the “O.J. Parole Show” lasted about two hours.

I spent the time before the decision watching MSNBC.com, which had a great lineup of guests including former prosecutor Chris Darden from the O.J. murder trial, and one of O.J.’s defense lawyers from that trial, Carl Douglas.

Some of MSNBC’s panel thought O.J. had blown it too. They too were surprised by the outcome. And here we are: The Juice is not yet loose. But he will be this coming fall.

tv
1 comment about "O.J. Parole Telecast Had Suspense, Thrills And A Surprise Ending".
Check to receive email when comments are posted.
Next story loading