Queen Vs. Queen As Women Take Charge On 'Game Of Thrones' 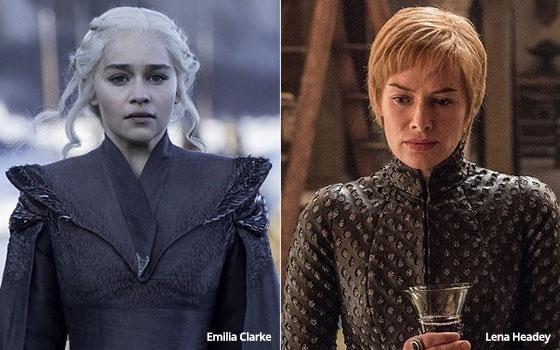 Women have long been at the forefront on “Game of Thrones,” but so far in the show's still-new seventh season, they seem to be dominating as never before.

Perhaps others have made this observation previously, but the role of women in positions of power on “Game of Thrones” practically marks this show as a landmark of the women's movement.

Please pardon me in advance for not knowing every last detail about “Game of Thrones.” I have seen almost every episode since the show began, but that does not mean I am capable of remembering who's who, what has happened or what is likely to happen.

But after two episodes so far in the new short, seven-episode season, it is becoming clear that we seem to be headed for a climactic battle between the show's two most powerful and ruthless women.

They are, of course, the dragon queen Daenerys Targaryen (Emilia Clarke, above left) and Cersei Lannister (Lena Headey, right).

The arms race is already on. Daenerys and her top aide -- Cersei's estranged brother Tyrion (Peter Dinklage) -- are hard at work forming alliances with other kingdoms to help in the planned invasion.

Meanwhile, Cersei's side is developing a new super-weapon that just might be capable of neutralizing Daenerys' dragons, which heretofore have proven invincible.

But it's not just the two queens who are stepping up their game this season. Sansa Stark (Sophie Turner), for example, was a shrinking violet in past seasons.

But this season she has just been appointed as temporary ruler of the North by the King in the North himself, Jon Snow, while he leaves to negotiate an alliance with Daenerys.

And then there is young Lyanna Mormont, played by 13-year-old Bella Ramsay, whose performance is otherworldly. As Lyanna, she commands attention in meetings of the grizzled, male officers of the Night's Watch, including Lord Commander Snow.

Who else? Diana Rigg as Olana Tyrell, Maisie Williams as Arya Stark, and certainly the imposing woman knight, Brienne of Tarth (Gwendoline Christie). Has there ever been a female character like her on TV -- or anywhere else for that matter? I think not.

Although I possess a reasonable level of confidence where my skills at TV criticism are concerned, I don't feel I have the same facility for social commentary.

Thus, I don't feel comfortable making observations about whether or not the primacy of women in authoritarian leadership positions on “Game of Thrones” bears any resemblance to trends underway here in the real world.

For one thing, I can think of no female dictators or female monarchs in the real world who wield the kind of power projected by Daenerys and Cersei.

Maybe their real-world counterparts are to be found in the business world, where some hard-charging female CEOs might be inspired by the take-no-prisoners attitude displayed by the warring queens of “Game of Thrones.”

Whether or not women are in charge now in the real world, they are certainly in charge on “Game of Thrones” doing what men do: Pursuing power and conquests, making war and wreaking havoc.