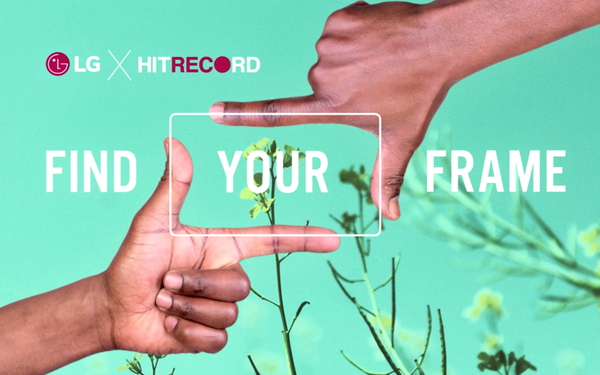 LG and Joseph Gordon-Levitt are teaming up once again to bring consumers into the mix for marketing.

Having worked together for the past two years on crowdsourced projects (“In-Between Moments,” which focused on music, and “Everyday Spectacular,” which was about finding the unexpected), this year’s effort is called “Find Your Frame.” The new effort between LG Electronics Mobilecomm and Gordon-Levitt’s HITRecord production company encourages them to highlight cinematography.

“We always work to enable and empower our customers to leverage LG’s technology to create and share meaningful content,” Frank Lee, director of public relations at LG MobileComm USA, tells Marketing Daily. “By partnering with Joseph and HITRecord for a third time, we are aiming to showcase the creativity and power that stems not only from their talented community but also our greater community as a whole, whether it’s artists or everyday people.”

In an introductory video, Gordon-Levitt explains that participants don’t have to be professional photographers or artistic visionaries to participate. “This is something anyone can do,” he says. “You don’t have to be a musician or performer. If you have a camera, you can do this.” The initiative will also feature a writing and rewriting challenge later in the year for more potential participation.”

The efforts are a celebration of Gordon-Levitt’s passions, as well as the vibrancy of LG’s consumer community, Lee says. “Highlighting Joseph’s passion for cinematography, this project will focus on the artistic impulse that guides you behind the camera before you hit ‘record,’ whether you’re trying to capture a concert, an amazing game-winning shot or just a silly time dancing at home,” Lee says. “In the end, we want all of our community to recognize the creative power within them and feel confident capturing and sharing their visions.”

As with their previous collaborations, the submissions will be combined into marketing and advertising materials. In addition to the introductory video created by Gordon-Levitt, LG will continue to promote “Find Your Frame” through its social channels, Lee says.