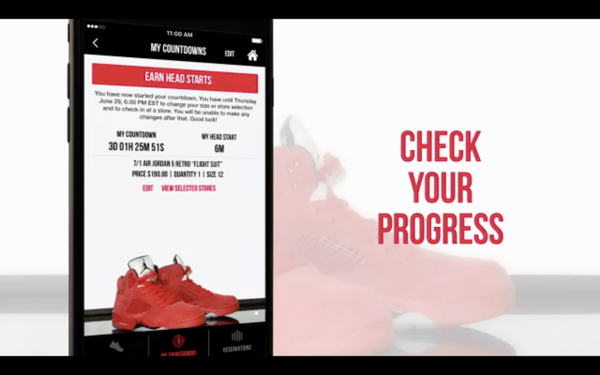 Just in time for back-to-school, Foot Locker is rolling its Launch Reservation app nationally, aimed at making it easier for sneakerheads to get their feet into the hottest shoes of the season.

While other brands have similar apps, including Nike, Adidas and Frenzy, an app from Shopify, the new Foot Locker app, which has been testing in some of its biggest markets since last spring, is important “because there are big shoe launches almost every weekend,” says Jed Berger, VP/brand marketing. “We wanted to make sure we have a system that is safe, fair and most of all, still exciting,”

While most of the commotion that stems from people camping out for days before a hot shoe drops into stores has moved online, for the most part, it’s still a frustrating endeavor, complicated by the stealthy use of shopping bots. While the mad run on shoes like Kanye West X Adidas Yeezy have gotten the most publicity, many shoes are in demand, particular as soon as they’re launched.

But as all retailers wrestle with using digital technology to make shopping less complicated, Foot Locker has an added burden: Getting a hard-to-get shoe is supposed to be hard. Would anyone want a Yeezy that’s easy?

“Scarcity is part of what drives the trend and the culture,” he tells Marketing Daily. “But there’s a difference between scarcity and mayhem, and we want to make sure we celebrate that scarcity fairly, safely, while still keeping it fun.”

After signing up for a particular shoe, users get a countdown clock, and when it winds down, find out whether they won, landed on a wait list, or if they need to try again.

While Foot Locker won’t begin its back to school marketing until mid-August, the Launch app may help in what is shaping up to be a brutal season.

In its latest projection of athletic footwear sales, the NPD Group expects “a low to mid-single digit decline for the back-to-school season,” writes Matt Powell, VP and industry analyst for sports. “Given the changes to advertised pricing policies, we can expect this to be the most promotional back-to-school in the 17 years I’ve been doing research.”

He expects the industry to be bruised not just by intense promotional wars, but also to declines in spending from Hispanic consumers, who account for about 20% of the U.S. athletic footwear market. He says Nike, Nike’s Brand Jordan, Vans and Skechers are likely to be hurt the most, and that Under Armour will also struggle.

He expects continued softness in activewear, too, but attributes that to a glut of low-quality offerings.

“The core activewear brands and retailers are getting crushed under the increased and inferior competition,” he writes. “Both Nike and Under Armour apparel will most likely struggle for back-to-school, while Adidas will thrive. The more mass brands should also fare well this season.”

Foot Locker’s Berger seems less concerned. The Foot Locker campaign, which Berger promises will continue the brand’s “all in good fun” spirit in a campaign from BBDO, breaks mid-August. “Sneakers are incredibly important to back-to-school,” he says, “and our campaign is all about making impressions. And kids love sneakers. They need sneakers.”