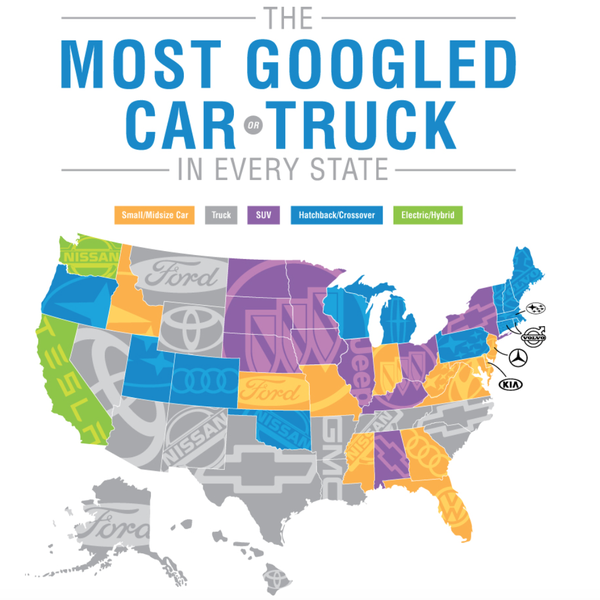 Buick Enclave wins the Google war, or at least the battle.

It is the model that consumers in the most states searched for, according to a study commissioned by Gold Eagle car maintenance products. The SUV is the most searched vehicle in Iowa, Kentucky, Minnesota, Nebraska, North Dakota, South Dakota, Ohio and Wisconsin.

Different models of Subarus are also popular online. Subarus are most searched for in Idaho, Massachusetts, Oregon, Pennsylvania, Utah and West Virginia.

Digital Third Coast looked at Google search data to see which states were searching for particular makes and models more than any other state. In doing that, researchers took the search volume for all cars and trucks, then compared that to the national search volume.

According to Google, since last year there has been a 7% search growth for motor vehicles. To break down that search, 62% came from mobile and 32% came from desktop searches.

Only two states search the most for the Electric/Hybrid category, Washington and California. With sales of Chevrolet EV Bolt in California rising 91% in the first quarter of 2017 and nearly 15% of the cars in the state required to be zero-emission vehicles, it’s no surprise that the Tesla is popular in California.

On the East Coast, the most popular category is Hatchback/Crossover category. Specifically, the Volvo XC70. This is the most googled car in Maine, Vermont, Connecticut, New Hampshire and Rhode Island.

Bigger states search for bigger cars. In Alaska and Montana, it’s all about the massive Ford F350. Texas loves the Chevy Silverado. In the southeast, Texas, Louisiana and Arkansas google trucks the most out of any vehicle.

SUV Google searches are spread out among Illinois, New York and Alabama. Small/midsize car searches are most popular in Idaho, Florida, Indiana, Georgia, Kansas, Missouri and a few other states.

North Carolina, Virginia and West Virginia are interested in the small/midsize category. Likewise, North Dakota, South Dakota and Minnesota search for the Hatchback/Crossover category the most. Texas, Louisiana and Arkansas went for the truck category.

“It’s certainly surprising that Buick is as popular of a search term as it is in the region,” Zajechowski tells Marketing Daily. ”I was also surprised to see that only two states had top searches for electric and hybrid vehicles. I expect that to change more in the near future.”

In terms of highly searched vehicles, American made vehicles are extremely favored in the Midwest than in any other part of the country.

Brands like Nissan could use this data to understand specific markets to target advertisements a bit more granularly, he says.

‘“For example, a national TV commercial ad campaign for their pickup trucks that is meant to target all segments in the U.S. may not be as impactful as creating two separate advertisements and targeting the Northwest market with Nissan Leaf advertisements,” he says. “The more data you have, the better informed you can be as a brand, and what better data to have than billions of keyword searches from Google?”