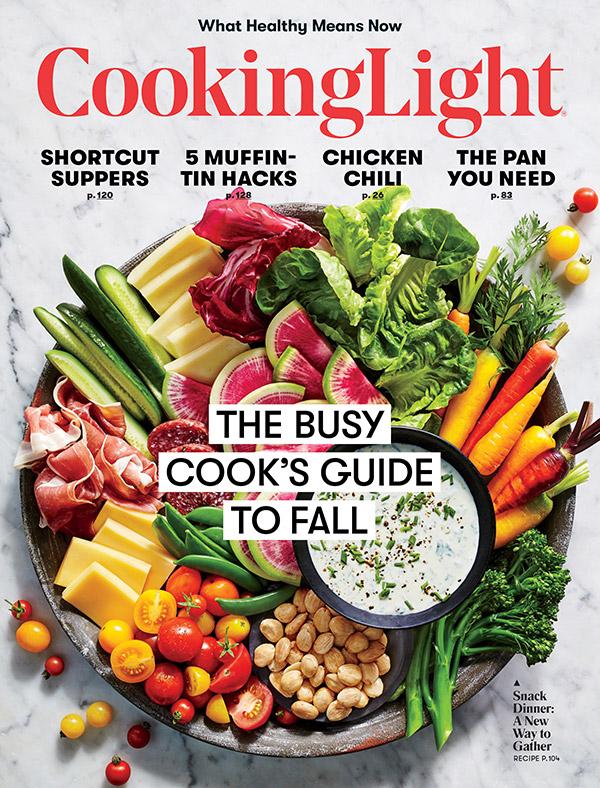 Cooking Light is debuting a new look and crisper editorial in its September issue, out today.

The redesign includes a wider logo, more white space and a minimalist design. The cover of the magazine has a tearaway at the top that reveals the new look and the tag: “What healthy means now.”

“The words ‘light’ and ‘healthy’ meant something different 30 years ago than they do now," Cooking Light editor-in-chief Hunter Lewis told Publishers Daily. “A big anniversary is always a good time to step back and try to gain some perspective."

The redesigned magazine is "a reflection of who the American food consumer is now. They are in the perimeter of the supermarket. When we talk about healthy, we talk about fresh," he said.

The redesign changed every page "from front to back," he added. “The intent was to sharpen our editorial focus and to make the print product more of a joy to read and use.”

Lewis has been top editor of Cooking Light since 2014. He was also appointed to the role of editor-in-chief of Food & Wine two months ago.

He said Cooking Light’s readers are increasingly using the print product as a “lean-back, immersive experience.”

“People will continue to use print as a way to engage. Whether an ad or a story, the way you consume it resonates more than something that’s flashing on a digital screen,” he said, underscoring Cooking Light's commitment to its print product. "It remains a core piece of the business."

As of early 2017, Cooking Light has 1.7 million print subscribers.

The cover story for September is about “Snack Dinner,” an idea created by executive editor Ann Taylor Pittman. She first posted a photo on Instagram of a creative take on dinner: a spread of meats, cheese, vegetables and dips on a sheet pan. Lewis said in his editor's note it is inspired, in part, by “the grazing nature of Jewish appetizing platters.”

“It got tons of likes, and then we started to carry that into the Cooking Light audience across platforms — and it really resonated,” he noted. “It’s a good example of an idea that started with a gut-level instinct and then to social, dot com and into print.”

Going forward, Lewis said Cooking Light will expand its licensing business. It already has ready-to-eat meals in supermarkets and meal kits available through delivery, thanks to a partnership with FreshRealm.

Though mum on the name, next spring, the magazine is partnering with “a big retailer, right in line with our brand,” Lewis said.