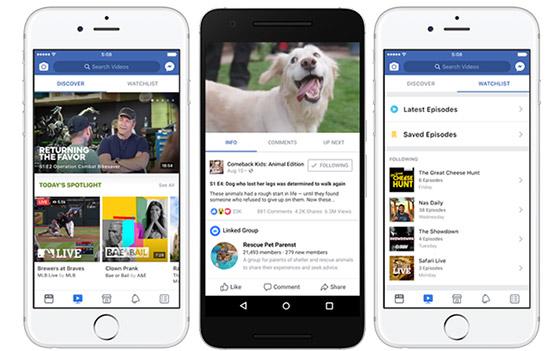 A number of top publishers are already testing original video content on Facebook’s new Watch network, according to reports in the Financial Times and CNBC, including Hearst, Condé Nast Entertainment, The Atlantic, Refinery 29, Quartz and Group Nine Media.

Some of the publishers are already cranking out new shows and other programming for Watch, which Facebook hopes will rival YouTube, as well as other video platforms like Snapchat, Netflix and Amazon.

Facebook has been paying $10,000 to $25,000 per episode for some shows, according to CNBC, and non-publishers are also providing original video content, including NASA.

Watch content is intended to compete with traditional TV. Facebook approached particular media companies with plans for content across multiple genres and topics. There is a minimum length of two minutes an episode, ranging up to 240 minutes.

Condé Nast’s contributions to Watch include “Virtually Dating,” in which two people go on a blind date in virtual reality, and Tastemade’s “Kitchen Little,” in which children collaborate with chefs. Quartz is leading its Watch programming with three documentaries, “Machines with Brains,” “Because Science” and an exploration-themed feature.

The Atlantic magazine is launching with two shows, one on the animal kingdom and another debunking errors taught in U.S. classrooms.

Mark Zuckerberg stated: “We believe it’s possible to rethink a lot of experiences through the lens of building community – including watching video. Watching a show doesn’t have to be passive. It can be a chance to share an experience and bring people together who care about the same things.”