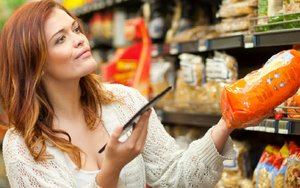 Last year, 51% of grocery purchases were influenced by digital media or information somewhere along the path to purchase.

That represented a near-doubling, in a single year, of digital’s influence within this sector, and brought it on par with categories such as health (51%) and apparel (56%), according to a new report from Deloitte. The report employs data from two surveys representative of the U.S. population, conducted late last year.

Fully 80% of shoppers surveyed have used a digital device to browse or research grocery products, tapping sources such as manufacturer and grocery retailer websites. More than three-quarters (77%) report using digital touchpoints such as recipe websites and blogs to drive awareness and find inspiration.

Not surprising, then, that mobile use among grocery shoppers is up nearly 10% versus last year, with 34% reporting that they use a smartphone to help choose brands during a shopping trip.

In fact, while 90% say that they consider a set of brands prior to arriving at the point of sale, more than half make the brand purchase decision at POS. (Also, ingredients are now as important as brand in purchase decisions, although both are still outranked by “value.”)

Further, consumers who embrace digital options — such as on-demand local delivery, in-store coupons and instant rebates or mobile checkout — before or during a shopping experience convert 9% more often than those who don’t.

For consumer products companies and retailers, all of this translates to increased urgency to deliver on consumers’ digital, omnichannel expectations, according to Deloitte. And for most, that will require building “next-generation capabilities that drive the convergence of digital/physical marketing, the consumer/shopper, and online/offline purchases,” conclude the analysts.

“Digital is expected to play an even bigger role in delivering the experiences that shoppers desire,” summed up Rich Nanda, principal, Deloitte Consulting LLP and U.S. consumer products corporate strategy and growth leader. “However, many consumer products companies and their retail partners have yet to take full advantage of the opportunity, potentially leaving money on the table.”

The gap between consumer expectations and current reality in grocery is clear in the finding that, despite digital’s influence on their decisions, just 33% of the shoppers said that digital makes grocery shopping easier, compared to 42% across other categories.

In some respects, retailers may have a natural edge over their suppliers: 41% of shoppers report using grocery retailers’ apps, compared to just 27% using consumer product companies’ apps. Still, this points to “ample opportunity for brands to innovate through digital technologies to deliver compelling grocery experiences,” notes the report.

To compete going forward, consumer products companies should “consider transforming how they operate day to day to become faster, more granular and more connected within a digital-first world,” concludes Deloitte. They need to “integrate and coordinate across their functional silos to align with a converged world where consumers can shop at any given moment and where the lines blur between digital and physical marketing, consumer and shopper, and online and offline purchases.”

The analysts also stress that digital and e-commerce “can provide new opportunities and new ways of working with retailers to drive brand engagement and accelerate organic growth. Many leading CP companies are working with retail partners to differentiate brands and create a competitive advantage by providing consumers convenient, curated, and integrated grocery shopping experiences.”

The report, “The Grocery Digital Divide: How Consumer Products Companies Can Deliver on the New Digital Imperative,” is free for download on Deloitte’s site.

The data were gathered through Grocery Digital Divide and Grocery Experience surveys commissioned by Deloitte and conducted online by an independent research company Nov. 3 - 18, 2016. The surveys polled national samples of 2,011 and 2,027 random consumers, respectively. Data was collected and weighted to be representative of the U.S. Census for gender, age, income and ethnicity; and have a margin of error of 2%.