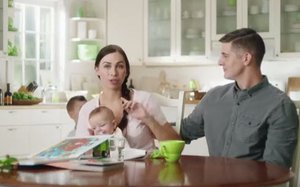 HelloFresh, one of the leaders in the still-nascent, closely watched meal kit market, continues to invest heavily in marketing and trial discounts in the U.S.

And its evolving advertising approach speaks both to growth and to the ability to do less explaining about the meal kit concept and more targeted benefits messaging.

Three new HelloFresh TV ads, from New York-based Pure Growth Consulting, continue the brand’s “Get Cooking” tagline, and a spirit of the joy of cooking. But whereas its “Tonight We Cook” spot that had been running since January, from Domani, featured a range of actors spanning ages and lifestyles and voiceover messaging, the new creative focuses on families, using the stories of real HelloFresh customers told in their own voices. There’s also a new emphasis on how the meal kits’ convenience can help families spend more — and less stressful — time together.

Mom says the kits provide “a system and a routine that calms the chaos of the day… Because [dad] works these crazy hours, it’s very important that we sit down and have dinner together. HelloFresh was an easy way for us to get on the same page with dinner.” Dad describes dinner as “one of our only times to connect,” and speaks of the ease of creating a “masterpiece” with the kits’ easy steps and “fun, delicious,” pre-portioned ingredients.

The spot ends with the “HelloFresh. Get Cooking” tagline and an offer of $30 off a first-box order, using the TV ad code provided.

The other two “stories from real customers” ads, in 30- and 15-second versions, will launch in the coming months.

Key rival Blue Apron — based and operating solely in the U.S. — saw its market value drop by 46% between its initial public offering on June 28 and its second-quarter earnings announcement on June 10. It reported higher-than-expected revenue for the quarter ($238 million, up 18% year-over-year), but also a higher-than-expected net loss (47 cents per share versus the 30 cents anticipated by analysts), which the company attributed to increased costs-of-goods-sold due to a new factory in New Jersey and higher produce costs.

Blue Apron’s customer count of 943,000 as of the end of June was up 23% year-over-year, but down 9% versus March. The company attributed that to a planned decrease in marketing spending (spending declined from about 25% of revenue to 15% between the first and second quarters). However, noted Forbes, “If the company continues to slash marketing spend in order to make up for its higher cost of goods sold, this very well could create further hits to Blue Apron's customer count.”

Berlin-based HelloFresh — 53%-owned by German e-commerce company Rocket Internet and operating in nine markets including the U.S. (its largest market) — saw its losses narrow during its second quarter ended June 30. Its revenue rose 53% to 230 euros ($272 million) year-over-year, and its losses declined to 23 million euros, from 34 million in this year’s first quarter.

HelloFresh, which is also reportedly preparing for an IPO, reported total active customers at 1.25 million as of the quarter’s end, representing a 54% year-over-year jump that helped cover expense hikes (including a 44% rise in fulfillment costs) and edged its gross margin up to nearly 60%. However, its average orders per active customer declined by 2%, to 3.7, in the quarter, reported Reuters.

Meanwhile, both companies continue to face competition from Plated (which reportedly had $100 million in revenue in 2016) and a host of smaller meal kit companies — and perhaps more important, from other food delivery services, retailers and even food makers jumping into offering meal kits and other convenience solutions.

In fact, just today, the Albertsons Companies — owner of thousands of grocery stores under more than 20 retail banners, including Albertson, Safeway, Vons and Jewel-Osco — announced that it is acquiring Plated as a wholly-owned subsidiary. This could be a real game-changer, as it will make Plated the first omnichannel meal kit service with national scale. Another game-changing possibility: Whole Foods, which began selling Purple Carrot meal kits in-store last year, is widely expected to push seriously into the meal kit business now that it’s owned by Amazon.

“To put the meal kit market in context, it is $2.2 billion — a ‘rounding error’ in the $1.5 trillion food industry,” food industry consultancy Pentallect wrote in June. “However, it is experiencing exponential growth, and [we] forecast that that annual growth will be 25% to 30% over the next five years. According to our consumer research, only 3.8% of the surveyed households have tried a meal kit in the past 30 days, and 27% are interested in trying one (other sources suggest the penetration is more around 2%). The low household penetration provides significant headroom for growth… [The meal kit market will face] significant and costly customer acquisition and retention and supply chain challenges — there are already signs of a shake-out. However, the market is still in its infancy..”

“Once the novelty wears off, most people will ask if meal kits fit conveniently into their life,” Forrester principal analyst Brendan Witcher asserted to TechCrunch in April.

Obviously, the meal kit companies beg to differ, and only time will tell whether these services prove to be revolutionary or largely a transitional phenomenon.