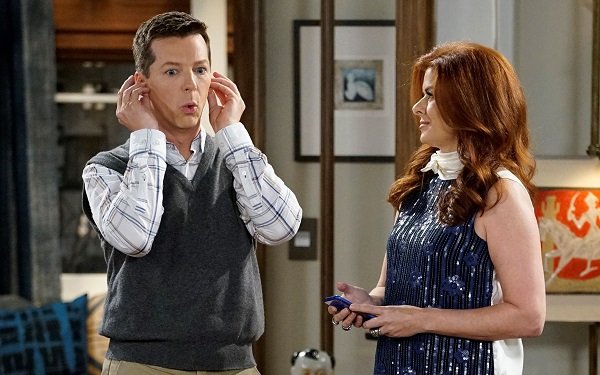 Miracle of miracles, the new “Will & Grace” is great.

Why consider this feat a miracle? The usual reasons such as the difficulties inherent in re-creating the magic in an ensemble project such as a TV show after 11 years off, and the fact that TV reboots disappoint far more often than not (although there haven't really been that many).

And yet here we are: The new “Will & Grace,” premiering Thursday on NBC, comes right out of its package fully formed. No pilot-itis for this show.

On the contrary, the requisite exposition is woven so seamlessly into the script that it comes out naturally.

So what have the show's four principal characters -- Will (Eric McCormack), Grace (Debra Messing), Jack (Sean Hayes) and Karen (Megan Mullally) -- been up to for the last 11 years?

Well, a lot -- but also not much, which is what makes it so funny. In the premiere episode, Grace is once again living with Will, Jack's still across the hall, and Karen is still an unrepentant boozehound living on Park Avenue. She is also an unapologetic Donald Trump supporter.

Speaking of whom, the premiere episode confronts the current political situation head on with a storyline that involves politically connected Karen obtaining an opportunity for interior designer Grace to redecorate the Oval Office.

So suddenly, all four characters find themselves in the White House, with hilarious results. Yes, hilarious -- not like some other new comedies reviewed here recently and in the past year in which laughter is in short supply or nonexistent.

Among the clever touches, Grace uses a bag of Cheetos to help her establish a color palate for the Oval's current resident.

He doesn't make an appearance on the show, by the way, but the point about his orange-tinted hair is made, while giving Cheetos some prime-time exposure within the show.

Perhaps the most refreshing element of the new “Will & Grace” is that it doesn't take its political point of view seriously at all.

Instead, this improbable trip to the White House is not used to preach angrily about Donald Trump, but really just to create a piece of outlandish, farfetched comedy.

I watched two of the three new episodes of “Will & Grace” that NBC (finally) provided for preview late last week and was newly impressed with the skill of this show's writers and actors.

All of them are among the best in the business, and it shows right out of the starting gate in this new, old sitcom.

It feels great to be reporting here that the new “Will & Grace” is humming on all cylinders. It is as if the people involved took a vacation -- albeit a very long one -- and have now returned well-rested and raring to go.

“Seinfeld” was a big part of it too -- the progenitor of it, you might say, although its run ended in May 1998, four months before “Will & Grace” was introduced.

On all five of these shows, the writing and performances had a certain sheen that most TV comedies don't achieve (a modern-day exception is “Modern Family” on ABC, which occupies a place of honor in TV comedy history all its own).

It's not for nothing that with the exception of “Will & Grace,” the other four have enjoyed lengthy runs in rerun syndication, where many have come to appreciate them even more.

Maybe “Will & Grace’s” relative lack of exposure in syndication -- at least for the last few years -- is what makes it seem to be so welcome in its return to first-run episodes this fall.

It seems almost incomprehensible that almost 20 years have passed since “Will & Grace” premiered for the first time. For most of its original run, it was considered, rightfully, a pioneering show for gay acceptance.

Here in 2017, there is much less of a necessity (if any) for a TV show to plow new ground where the depiction of gay people is concerned (thanks in part to “Will & Grace”).

In fact, the differences between then and now are well-explored in Episode Two of the new “Will & Grace,” which harkens back to that era while at the same time keeping its feet planted firmly in the present day.

In coming back and coming out stronger than ever, “Will & Grace” once again defies the odds.