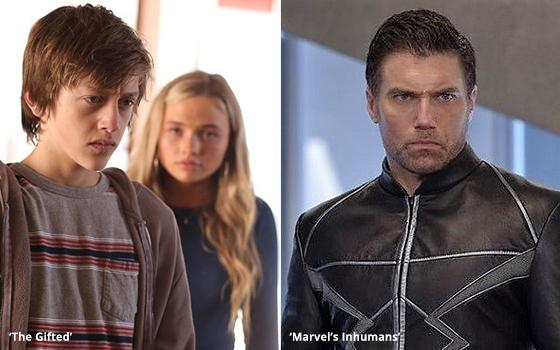 If it weren't for genetics, there would not be a Marvel universe.

At least it sometimes seems that way, especially if, like me, you just watched the premiere episodes of this fall’s two new Marvel entries on TV -- “Marvel's Inhumans” premiering Friday on ABC and “The Gifted” premiering Monday on Fox.

The “Inhumans” are people endowed with special powers beyond those of mortal men (and women). They have attained these abilities through some sort of genetic mutation (possibly natural but also engineered).

On the Fox show, the gifted people of the title are also humans endowed with special powers via the process of genetic mutation. In this show, they comprise an outlaw class known as Mutants, sometimes nicknamed “muties.”

Whether or not they have committed crimes, the mutants of “The Gifted” are forever on their guard for police, both local and federal.

The master race of superhumans on “Marvel’s Inhumans” seems to have solved the problems associated with living among ordinary humans by leaving Earth and colonizing the moon.

This plan works for a while, but in the two-hour premiere, there is trouble brewing for the Inhumans both on the moon and on Earth.

Now, did anybody notice the insertion two paragraphs above of the two-word phrase “master race”?

Its use was deliberate because at various times while watching “Marvel’s Inhumans,” its race of superbeings gave me the uncomfortable feeling that I was watching a TV show whose point of view seems to favor applying advances in DNA and gene science to actually engineering -- i.e., creating -- a master race of people with specific (and extraordinary) powers and abilities.

On the show, the superbeing class is even positioned as “better” than the lower, working classes who are exploited by the superbeings. This was a lot to take in for a prime-time TV show adapted from a series of comic books.

And so, for the first time in my 35-year career as a journalist on the TV beat, I am describing a new TV show as having eugenic qualities.

And here is another description of it: Questions of genetic ethics aside, this show is terrible. So far, it is the worst of the new fall shows, by far, that I have watched.

Among other things, it is a cheesy mess of special effects you've seen a million times. In addition, the producers of this show seem to believe that they can take any dull scene and enhance it with loud martial or magisterial orchestral music and it will somehow elevate the dullness. News flash: This does not work.

At one point in the show, the queen of the Inhumans asks of another inhuman who is intent on seizing the throne: “Is there a point to any of this?” To me, the question summed up how I felt about this show. The answer is: No, there is no point.

As for “The Gifted,” this show is more earthbound and as a result, it is more relatable than “Marvel's Inhumans.”

For some reason, the word "Marvel’s" doesn't appear in the Fox show's title. But the show is either adapted or somehow descended from a Marvel comic book series. At some point in the show, you will learn that the gifted folk here have some sort of relationship to Marvel's X-Men

If you are interested in learning more, don't look at me. What do you think Wikipedia is for?

In “The Gifted,” the Mutants on the run are a couple of teens -- brother and sister -- whose parents didn't know they were muties until one of them almost wrecked the school gym during a dance because he became angry. Miraculously, almost nobody got hurt.

For a show whose premise seems similar to so many other shows of this type (you can look that up on Wikipedia too), “The Gifted” was not bad at all. For some reason, this show worked far better than “Marvel’s Inhumans.”

That's likely because it is reasonable to root for these muties in a way that is not possible for the master race of Inhumans on ABC.