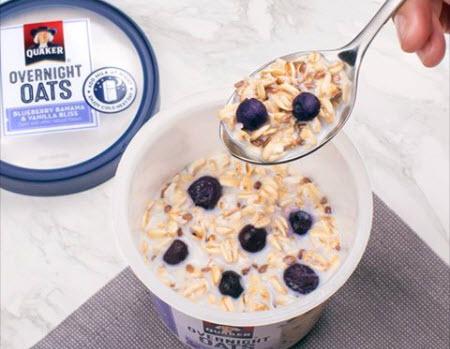 That’s according to rankings for the six months ended in July from Engagement Labs’s TotalSocial data, which continuously measures the quantity and quality of brands’ social media and face-to-face word-of-mouth.

Looking at the top 10, Quaker took the #1 ranking, jumping seven places in comparison to the first round of these rankings, which were released in March and spanned 12 months ending in January 2017.

Betty Crocker gained four positions, to rank #2, but the biggest gains were logged by Oreo and Perdue: Each rose by 17 places, to grab the #3 and #4 rankings, respectively.

Oreo’s gain reflects above-average scores both online and offline, as a result of increased focus on its online/digital efforts over the past six months, says Keller. Creative campaigns — including the crowdsourced flavor contest #MyOreoCreation, which employed  influencers and a Wonder Vault Bot — drove the brand’s online conversation volume score up by 25%. Also, its online brand-sharing score — the number online conversations in which people are talking about a brand’s social media content — more than doubled.

Perdue saw a dramatic increase in its offline brand-sharing score, which nearly doubled between January and July, suggesting a surge in consumers’ face-to-face conversations about the brand’s marketing and advertising. “Perdue’s recent marketing efforts, particularly those focused on the authenticity of the brand and the generations of its family business, are resonating with consumers,” Keller noted to Marketing Daily.

Goya saw gains in both offline influence and brand sharing, as well as its online volume and sentiment scores. In May, Goya announced that, for the first time in 60 years, it would forgo sponsoring the Puerto Rican Day Parade in New York City, after learning that a leader of an ultranationalist Puerto Rican group responsible for numerous bombings in U.S. cities during the ’70s and ’80s would be honored at the event. “Goya was among the first brands to make this announcement, and its leadership clearly made a positive impact on the brand’s reputation among many consumers,” says Keller.

While Oreo, Perdue and Kraft were new to the top 10, Heinz, Pillsbury and Nestlé fell out of it.

Heinz dropped to #17, from #3 in the last ranking, due to a drop in sentiment and influence scores, both online and offline, as well as a decline in its offline volume score. All of which indicates that much of the relatively little discussion about the brand is negative, says Keller.

The Kraft Heinz Company’s use of zero-based budgeting, which has also been adopted by other big food companies, may be a contributor to the recent results, Keller observes. “The question is whether the pendulum may have moved too sharply toward cost efficiency versus effectiveness” when it comes to marketing, he says.