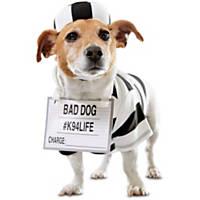 The National Retail Federation is predicting that Americans will spend $9.1 billion on Halloween this year, a record, up 8.3% from last year. And more adults than ever expect to dress up in costumes.

That works out to roughly $83 per person, with 179 million people saying they intend to celebrate somehow, up from 171 million last year.

Ghouls plan on spending the biggest money on costumers–about $3.4 billion– with 48% of adults saying they’ll get dressed up. The most popular choices are witches, Batman, some kind of animal (led by cats, dogs and cows) and the ever-present pirate.

For kids, 3.7 million are likely to select an action character or superhero; 2.9 million selecting a Batman character, and 2.9 million choosing a favorite princess. And 16% plan to party with their pets, with hotdogs, lions and pirates topping the list of favorites. (That category is already turning fiercely promotional, with companies like Petco already knocking 25% off many costumes in its Bootique.)

Candy is the second-biggest expense, with shoppers planning to spend $2.7 billion, followed by decorations (also $2.7 billion), and $410 million on greeting cards. (The NRF survey is based on some 7,000 adults, and conducted by Prosper Insights & Analytics.)

The holiday falls on a Tuesday this year, and whole weekday hauntings tend to be less elaborate: 71% say they’ll be passing out to candy to neighborhood trick-or-treaters, 49% will make the yard look festive, 46% plan to carve up a pumpkin, 31% say they’ll take their kids out to trick-or-treat, and 23% plan to take a trip to a haunted house.

And in proof that Halloween-themed travel is casting a bigger shadow every year, some people are willing to go the distance to find that haunted house: TripAdvisor is running a sweepstakes to win a sleepover in the London Dungeon. Called “Sweet Screams,” the winner gets a “creep-over” for four at the attraction, which combines actors, special effects and rides to recreate some of the city’s gory and ghoulish historical events.