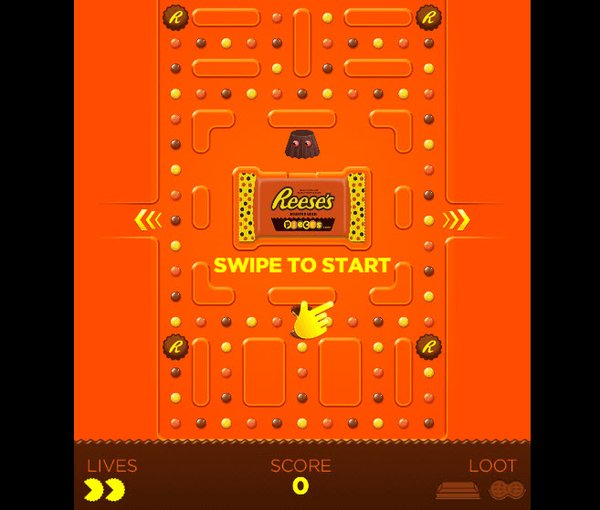 Reese’s Pieces has created a Snapchat game designed to build on the success of its Pac-Man-themed “Game Changer” TV campaign, which launched in April.

The game — an ad through an in-app media buy and Discover targeting on Snapchat — will run for six weeks. It employs Snapchat’s new immersive mode, designed to provide a “more intuitive” gaming experience.

The game, which features a Pac-Man-like Reese’s Peanut Butter Cup gobbling up Reese’s Pieces as it runs through a maze, can also be played in a web browser.

The brand directed fans to the game by posting a custom Snapcode for it on the Reese’s Twitter page. It is also promoting the Snapcode through a Twitter buy, according to Noelle Perez, senior manager, global market and digital advancement for The Hershey Company.

The Reese’s Pac-Man game concept was developed by the Arnold agency, and the game was built by TreSensa. The Reese’s Pieces Pac-Man TV ad (below), also from Arnold, has aired more than 12,500 times, according to ispot.tv, which assigned it an engagement rating of 7.5 out of 10.

Hershey is actively exploring gaming opportunities to apply what is learned in future activations for its brands, Perez tells Marketing Daily.

Another recent example of on-the-go engagement was this Easter’s Reese’s Egg Finder app, a web-based, geo map, she notes. Users entered their location in the app to find them nearby stores selling the brand’s peanut butter eggs, and could also tag a location to indicate that it was selling the candy eggs.

Users were “interacting with their friends in a ‘game-like’ fashion,” Perez says. “The app was really powered by UGC, because consumers were doing their searches all on their own; the brand wasn’t promoting store locator functionality.”

Another Hershey brand, Jolly Rancher, did a brand takeover on Twitch and created transparent, lower-third ad banners that made Jolly Rancher characters look like they were part of a Ninja Turtles “Turtles in Time” speed run game.

“Influencers wore Jolly Rancher swag and ate candy while playing the game, and also invited their other influencer friends to join in on the fun,” Perez says. “In the chat conversation on the side of the ‘Turtles in Time’ speed run game, product was given to fans who were using the designated hashtag.”

This interactive game activation exceeded expectations for the project and Twitch metrics in the category, she reports.