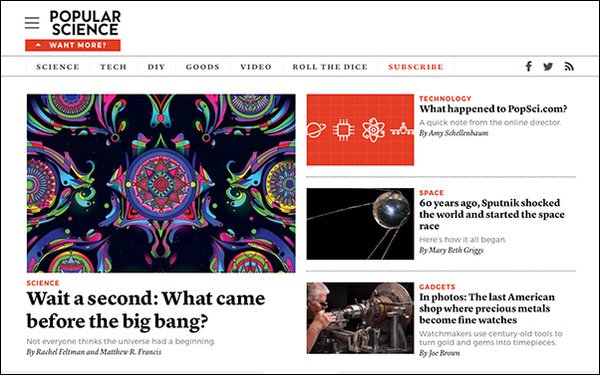 Popular Science’s site is undergoing its first web redesign since 2014, with the aim of improving its readability, clarity and navigation with a cleaner layout.

“For the last year or so, there has been a lot of programmatic advertising by necessity [on the site]. We wanted to make sure the whole rest of the site was as fast as possible, so [the ads] don’t slow down the site, and the user doesn’t feel they want to leave because it's performing slowly,” Schellenbaum told Publishers Daily.

“We wanted to design something so clean the ads would not throw a wrench in it,” she added. “Our No. 1 priority was making this site faster.”

Verticals are now displayed on a sticky horizontal navigation bar, and split up into science, tech, DIY, goods and video.

Each vertical page mirrors the site’s homepage, giving readers with a particular interest in one Popular Science vertical "their own homepage,” Schellenbaum said.

Soon, the team behind Popular Science's site wants the ability to ask readers for a log in (with the redesign, the site now lives on a secure HTTPS location), and perhaps offer personalized content and custom story generation, based on a reader's interests.

Schellenbaum said going forward, they are looking at a potential pay gate, with a lighter ad experience, though "we have not decided anything," she said.

It’s been a good year for Popular Science. Average monthly audience grew 38% year-over-year in August, and it ranks third among the top 10 magazine brands in print and digital growth, according to MPA.

Popular Science will redesign its newsletters next, with a mobile-first format, and expand its offerings to include highlights from categories such as space, animals, gadgets and health.