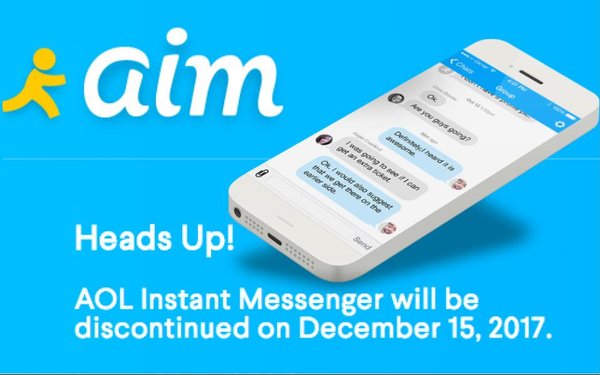 Marking the end of an era, AOL announced plans to shutter AIM on December 15.

While acknowledging its remarkable 20-year run, company executives admitted that the instant messaging service has become something of relic.

“The way in which we communicate with each other has profoundly changed,” Michael Albers, vice president, communications product at AOL patent company Oath, stated.

Millions of consumers who once agonized over their AIM screen names and buddy lists have since moved on to SMS services and apps, like Facebook Messenger and Facebook’s WhatsApp.

As a result, some analysts don’t see the decision as having much of an impact on the marketplace.

“I don’t think there are any implications,” Pivotal Research Group analyst Brian Wieser said on Friday. Regarding AIM’s obsolescence, he said it faced too much competition from more innovative companies.

“While AIM was pioneering, other services helped expand the messaging market and grew far faster and to a much bigger scale than AIM,” said Wieser.

“Communication apps are morphing into operating systems in their own right,” Stout said on Friday. “Global instant communication used to be a pretty amazing feature, but now it's just table stakes to play at all.”

More broadly, “Most communication apps share the same features, but user expectations continue to grow each year,” Stout added. “Products that aren't investing in AR, third-party extensions, voice, and screen-sharing among other new technologies will continue to lose the fight for user attention.”

As of April, Facebook Messenger boasted more than 1.2 billion monthly active users. The growth is impressive, considering the competition that Messenger is facing, including from other Facebook-owned apps.

If not at the expense of Messenger, Facebook is investing significant resources into Direct, Instagram’s own messaging feature. The social giant recently streamlined Direct to present users’ permanent and disappearing messages in one thread.

Since its latest update in late 2016, the number of people using Direct has grown from 300 million to 375 million, per internal figures.

Plus, more than 1 billion consumers use WhatsApp on a daily basis, worldwide. Paving the way for its enterprise expansion, WhatsApp recently began verifying business accounts.

On the consumer-facing side, Facebook recently made it more fun to send and receive messages via WhatsApp. When sending out Status updates, WhatsApp users can now overlay text messages onto colorful backgrounds.

As part of Verizon’s acquisition of AOL and Yahoo, the once-dominant platforms were placed under the umbrella of Oath earlier this year.