Amazon Puts Out A New Tentacle To Grab Teen Shoppers 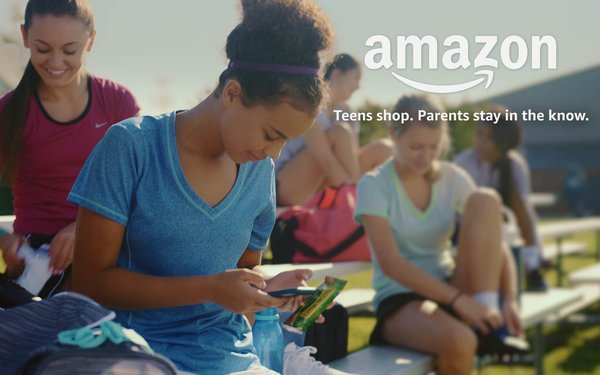 Amazon yesterday announced a new program that allows adolescents aged 13 to 17 to shop or stream content using their own login on the family’s account while keeping parents “in the know.” After the teen places an order on the Amazon mobile app, parents will get a text or email showing the item, cost, shipping address and payment information. And if the parent has a Prime membership, the teen will have all its perks, too.

There’s also room for an optional note on all orders such as, Amazon says, “This is the book I need for class.” Or, experience tells me, something like, “If you really love me, you’ll okay this.” Families can skip the vetting process entirely by setting a pre-approved spending limit for the teen, but they’ll still get a record of what’s ordered and can cancel it within 30 minutes.

“Amazon's new plan aims to get teens hooked,” reads the hed over Julia Horowitz’s story for CNN Money. But Michael Carr, vice president of Amazon Households, spins it more benignly in the release: “As a parent of a teen, I know how they crave independence, but at the same time that has to be balanced with the convenience and trust that parents need.”

USA Today’s Charisse Jones points out that the teens and tweens who make up Generation Z … influence $600 billion of family spending, outnumber Millennials and will make up 40% of consumers by 2020, according to the retail strategic firm HRC Retail Advisory.

“There’s a short-term uplift of the sales that come incrementally through the teen,” Gene Alvarez, a managing VP of research for Gartner tells Jones. “And then there’s the long-term impact. Think about telling teenagers, ‘just get your stuff on Amazon.’ When they transition to college, that spending pattern will still be there, and when they're in the workforce, they've kind of grown up on Amazon.”

Amazon.com for Teens is really just accelerating the brand recognition that the company already enjoys with the cohort, of course.

“According to a survey by Piper Jaffray, that mindshare, as it is called in the branding industry, is growing and embedding Amazon’s presence among American teenagers to a point where other rivals are likely going to play catch-up for years to come,” Rex Crum writes for the San Jose Mercury News.

“Piper Jaffray analyst Michael Olson said a survey of more than 6,000 American teenagers found that Amazon’s mindshare among teens reached 49% in the fall of this year, up from 43% in the fall of 2016. To put that in some perspective, Olson said Amazon’s mindshare level among teenagers is 8.5 times greater than that of eBay, which came in second place in Piper’s survey,” Crum continues.

Bloomberg Technology’s Jing Cao reminds us that as “more commerce moves online, foot traffic at malls has declined significantly, and the ‘mall rat’ — those teenagers who spend all their free time (and presumably their allowance) at a mall — is becoming a relic of the past. Traditional retailers like Abercrombie & Fitch Co., Express Inc. and Urban Outfitters Inc., have had trouble attracting teen shoppers, who tend to have fickle tastes and are notoriously unpredictable.”

Indeed, while we’re speaking of getting homebound, texting adolescents hooked, the hed over a Wall Street Journal “Heard on the Street” column Tuesday tells us, “Liquor Makers Need to Sober Up to the Decline in Teenage Drinking.” Stephen Wilmot writes that “today’s smartphone-obsessed teens” are “shaping up to be an antisocial lot” who tend to smoke more marijuana than their predecessors but drink less than the legally underaged did a decade ago.

According to the National Survey on Drug Use and Health, 20.3% of Americans engaged in underage drinking in 2015 compared to 28.2% in 2005. “Unless stay-at-home teens suddenly blossom into wild 20-somethings, it could signal a gear shift in consumer tastes that companies will need to anticipate and adapt to,” Wilmot writes.

But alcohol marketers have proven to be a resourceful group over the eons.

“Underage drinking has obviously, by the tone of this article, been a healthy source of revenue for liquor producers for a long time,” observes one commenter to the WSJ piece. “Watch them migrate to pot.”