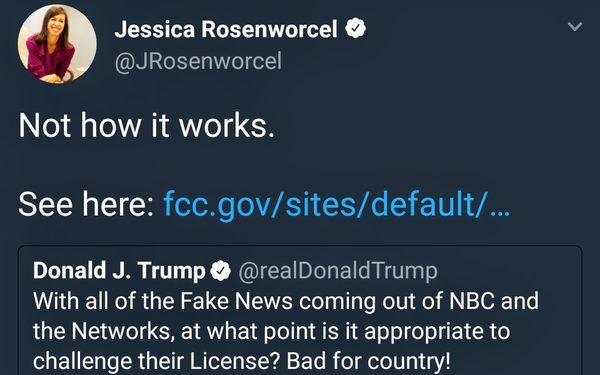 After a succession of tweets making not-so-veiled threats to “challenge” the broadcast licenses of TV news organizations, one of the Federal Communications Commission’s commissioners schooled President Donald J. Trump that is “not how it works.”

In a tweet from her @JRosenworcel account, FCC Commissioner Jessica Rosenworcel instructed the President to go to a link hosting a 33-page document explaining how the commission works, including its regulatory authority and how it reviews broadcasting licenses.

“Freedom of the press is a cornerstone of our democracy,” she added in a subsequent tweet. “I hope my @FCC colleagues can all be on the same page with respect to the 1st Amendment.”

No tweets or statements were issued by FCC Chairman Ajit Pai, a Trump appointee.

Rosenworcel’s followed @realDonaldTrump’s tweets first questioning a review of NBC’s broadcast licenses, and then another doubling down and suggesting a challenge of all broadcast news networks that he doesn’t agree with:

“Network news has become so partisan, distorted and fake that licenses must be challenged and, if appropriate, revoked. Not fair to public!”

Early Thursday morning, @realDonaldTrump added yet another tweet: “The Fake News Is going all out in order to demean and denigrate! Such hatred!”

Trump is not the first POTUS to try and challenge the FCC broadcast station licenses of media companies with news organizations whose reporting he didn’t agree with. During its coverage of the Watergate scandal, President Richard Nixon tried to do the same with the Washington Post Co. 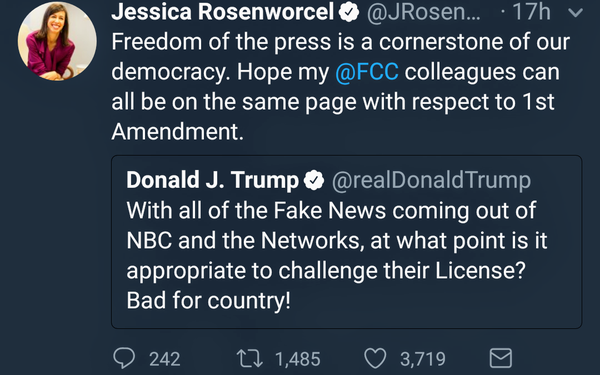