Get Your Motor Running: 'American Chopper' Is Back 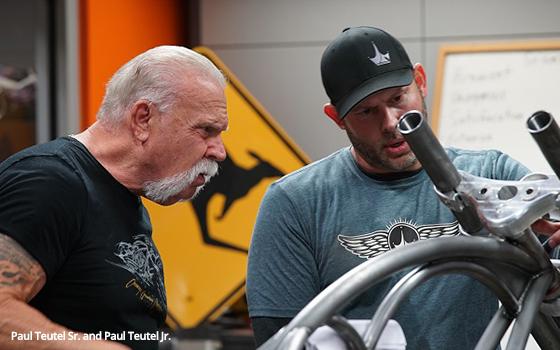 If “Will & Grace” can make a comeback from the early ’00s, then why not “American Chopper”?

I know what you’re thinking: The two shows are not necessarily similar.

One is prime-time network TV’s groundbreaking, best-known gay-themed sitcom. The other is a brawny basic-cable reality show about a family in upstate New York that builds custom motorcycles.

And yet, they’re similar because their heydays were in roughly the same era. And the success of each of them back then is the whole reason they're coming back now.

It doesn't seem that long ago, but in terms of recent TV history, it sometimes feels like ancient times. It is an era that is hard to define, or to label. But it’s the era before the one we’re in now.

Back then, ratings for smart network sitcoms such as “Will & Grace” -- and occasionally, a reality show featuring a real-life contentious family -- could score ratings that were respectable, and today would be considered akin to accidentally stumbling on a cave full of buried treasure.

The thing about these revivals is that, given the hyper-competitive environment “regular” TV finds itself in today, it’s doubtful these new versions of these old shows will attract the kinds of audiences they once did.

It is nice to have them back, however. This is especially true of “American Chopper,” which in its day was one of the best reality shows of its kind.

The family-reality or celebrity-reality show never really had a Golden Age, mainly because so few of them stuck around for very long.

Only one of them had exceptional staying power -- “Keeping Up with the Kardashians” (premiere date October 14, 2007) -- and certainly opinions are divided on the value of that to anyone.

Many came and went. My own clips are littered with stories, interviews and reviews marking the pending premieres of reality shows featuring the families and/or relatives of Dee Snider, David Hasselhoff, George Hamilton, Rod Stewart, Sinbad, Hulk Hogan and others too numerous to name (or to bother to look up).

One exception to this list of family-reality never-weres was the show that ushered in the whole trend -- “The Osbournes” (2002-05, MTV). Another was “American Chopper,” which was one of the best of them.

On the show, this family from Orange County, New York, was seen building custom motorcycles for various clients such as large companies whose cycles would be designed with some sort of company theme in mind.

As the motorcycles made their slow way to completion, father and son Paul Teutel Sr. and Paul Teutel Jr. engaged in an epic generational battle that was endlessly fascinating to watch.

But the relative merits of TV shows are something of a specialty of mine. And for me, the original “American Chopper” was a gem from the day it premiered to the day it ended -- a sad day indeed.

I also got to know the Teutels through several interviews and a number of columns singing their praises. Few people I have encountered in my career were more interesting than they to interview, write about and get to know (in the vague way that journalists get to really “know” anyone they cover).

Although I don’t really have any right to claim these people as “friends,” I nevertheless felt as if I had heard that a couple of friends were coming back to town when I saw the news release from Discovery announcing their return (and featuring a present-day photo similar to the one above).

Will the new “American Chopper” produce the same magic as the old show? That rarely happens, of course, but when it comes to the Teutels, anything is possible.