'Washington City Paper' Is Put Up For Sale 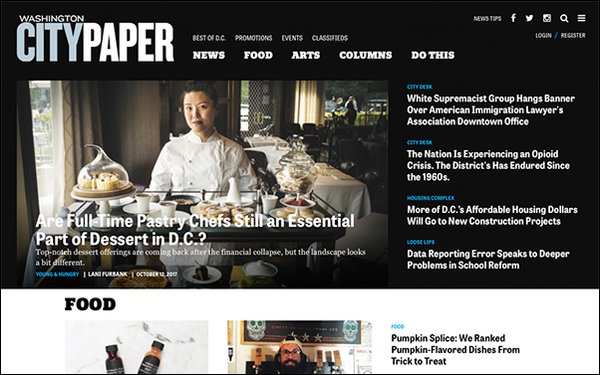 Chris Ferrell, the CEO of parent company SouthComm Inc., told the Washingtonian, which first reported the news, that he is looking to find a buyer by the end of the year.

SouthComm Inc. wants to focus more on business-to-business outlets, which are “frankly a better business,” he added.

“We’ve been slowly selling a number of our alt weeklies,” Ferrell told Washingtonian.

According to SouthComm’s website, it owns more than 30 business-to-business publications, as well as regional outlets like Nashville Scene, Kansas City's The Pitch and Cincinnati's CityBeat.

The Washington City Paper was founded over 35 years ago by Russ Smith and Alan Hirsch, the same founders of the Baltimore City Paper. After owners like Creative Loafing and Atalaya, it was bought by Nashville-based SouthComm Inc in 2012.

WCP boasts big names, such as Katherine Boo, Ta-Nehisi Coates and Amanda Hess, as contributors, and it has been edited by Michael Shaffer, Erik Wemple and the late David Carr.

Alt-weeklies have had a tough year in the face of declining print advertising revenue. The Village Voice, one of the most iconic alternative publications, ended its print product in September. Weeklies in other cities, such as Boston, Philadelphia and San Francisco, have shuttered.