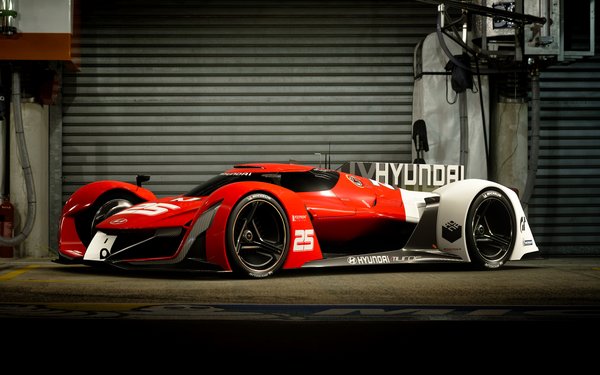 The N 2025 Vision Gran Turismo, a concept vehicle from the Hyundai’s design studio, is featured in the video game, now on sale for the Playstation 4.

The vehicle is Hyundai’s entry in GT Sport’s top racing class, Group 1, where it competes against other manufacturers’ Vision Gran Turismo projects and a multitude of well-known real-world prototype racing cars from different manufacturers including Aston Martin, Bugatti and McLaren.

“The N 2025 Vision GT is our ambitious take on what we think prototype racing could look like in the not-too-distant future,” said Chris Chapman, chief designer at the Hyundai Design Center, in a release.

The concept is a point of pride for Hyundai on many fronts, he adds.

“It effortlessly combines beauty and function as a racing car, and it boasts a fuel-cell powertrain that is as progressive as the bodywork wrapped around it,” Chapman says. “It’s exciting to know that players who drive it in Gran Turismo Sport can now do so in pursuit of a real FIA Championship that’s exclusive to the game.”

Gran Turismo launched in 1997. The multi-award-winning franchise has become the most successful title for the PlayStation console, surpassing worldwide sales of 76 million units. It is regarded as the best and most authentic driving simulator due to true-to-life graphics, authentic physics technology and careful attention to detail.