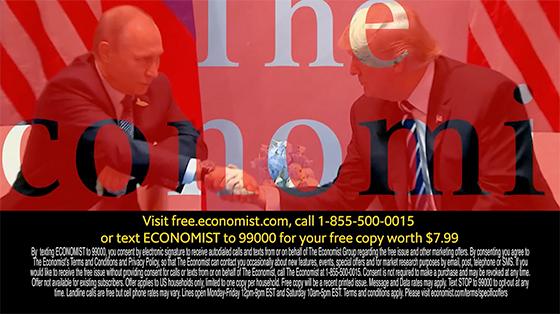 The Economist is hitting the U.S. with another direct response TV (DRTV) campaign, but this time the creative was designed in-house and focuses on markets in Washington, DC and San Francisco.

The ad, called “The world needs another Economist reader,” is the first to be created by the company’s documentary production unit, Economist Films, for The Economist brand.

It will air for the next two months on national cable networks and in key target markets, including San Francisco and Washington, DC. The two cities were recognized as key markets based on audience and market data, Beard said.

It will also appear on a national broadcast spot on the “Late Late Show with James Corden.”

The London-based Economist launched a DRTV last October around the U.S. election, as part of a larger advertising push into the country. Compared to the previous campaign, this ad contains news footage rather than animation, to replicate The Economist’s best-performing ad in the UK, Mark Beard, senior vice president of North America at The Economist, told Publishers Daily.

The creative touches on relevant topics, such as North Korea and the nuclear threat, healthcare and President Trump’s relations with Vladimir Putin and Russia.

Beard said in a statement the newest addition to the campaign is part of the company’s push to “ramp up our marketing efforts in the U.S. to drive awareness of The Economist brand and increase subscriptions.”

This DRTV campaign was informed by more audience research and data, collected from the previous campaign and marketing for The Economist in the UK.

“We know potential subscribers are grazing for news on cable, so a decent chunk of spend is allocated to relevant cable news, lifestyle and science and tech programs, but we've also focused on two important markets for us: DC and San Francisco, with an emphasis on placements during news programs,” Beard said.

The direct-response ad urges viewers to call, text or visit a websites to receive a free copy of The Economist, with hopes the viewer will then be converted to a subscriber.

The publisher is also testing out a pilot advertising campaign in podcasts. Three podcasts are included in the pilot program: "HBR Ideacast," "Intelligence Squared" and "The Weeds."