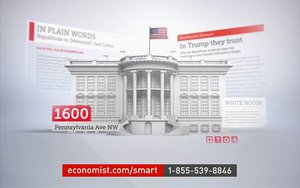 The Economist is tackling the U.S. market with a new direct-response television (DRTV) campaign to air around the U.S. presidential election.

The campaign will run for eight weeks and promotes The Economist’s content across print, online and audio, as well as the magazine’s analysis of important world events and trends, including the U.S. election.

The campaign is part of a larger advertising program in the American market.

For example, earlier this month, a 173-year-old newspaper based in London partnered with Snapchat Discover for a weekend edition on the platform to reach Millennials in the U.S.

In a statement, Mark Cripps, EVP of brand and digital marketing at The Economist, said the “fresh and innovative creative approach” to the DRTV campaign “will help us drive subscriptions across the U.S.”

"As we ramp up our marketing efforts in the U.S., this activity is an important piece of our digital marketing plans to drive awareness of The Economist brand and increase subscriptions,” added Mark Beard, SVP of North America at The Economist.

The DRTV ad is called “Dynamic World” and was created by brand consultancy BrandPie and produced in collaboration with Versus, a creative production studio. DRTV is a type of advertising that asks consumers to take action, such as calling an 800 number or visiting a Web site, usually for a special promotional value of the product.

D Media, an IPG Mediabrands direct-response agency based in New York, led the media buy, which was delivered through a network of national cable partners. The DRTV ad will target consumers “on a number of high-interest stations, at times throughout the day when they are most likely to respond,” according to The Economist.

In May, The Economist launched its first data-driven, DRTV commercial in the UK on Sky channels.